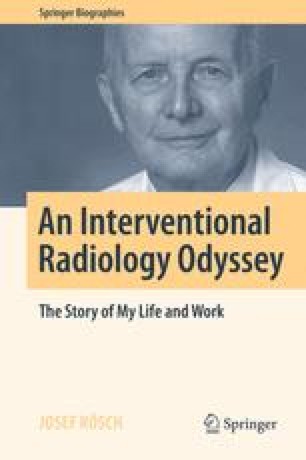 In Prague, I did only clinical research, mainly exploring new angiographic techniques in diagnosis of diseases of the abdominal organs. It began in 1954 when I was selected with a few young radiologists to lecture on atomic energy at military schools. During a teaching course on this topic at the Military Medical School at Hradec Kralove, I visited the University Radiology Department led by Professor Jan Bastecky. Radiologist Dr. Leo Steinhart and surgeon Dr. Vladimir Brzek were, at that time, introducing the technique of transparietal splenoportography for diagnosis of splenomegaly. This technique visualizes the portal venous system using contrast material injected directly into the spleen. Coming back to Prague, together with my colleague Dr. Jiri Bret, we first simplified the technique of splenoportography. Not having a dedicated angiographic room with an automatic film changer, we performed procedures on a fluoroscopic table with conventional x-ray cassettes that were manually pushed through the screen (Fig. 5.1). The splenic puncture performed under fluoroscopic control enabled us to access even normal sized spleens (Fig. 5.2). An apneic pause made the procedure safer. We did a lot of procedures and, as the only hospital performing splenoportography in Prague; we received referrals from the other hospitals. When we obtained a dedicated angiographic room in 1957, the procedure was much simpler. We did splenoportography for diagnosis of the spleen, liver and pancreas (Fig. 5.3). Our first paper on “The Improvement of Diagnosis of Epigastric Tumors by Splenoportography” was published by the Czech Medical Journal in 1957. In 1958, we also started publishing in the German journal – Fortschritte Röntgenstrahlen with a paper on “Splenoportography in the Diagnosis of Splenomegaly.” I was very active in publicizing splenoportography; writing papers and lecturing at scientific meetings. We also published a book in 1958, “Transparietal Splenoportography” that was based on our experience performing the examination on 500 patients. This book had 113 images and 356 literature references. In 1958, I was asked to make a teaching movie on splenoportography by the Czechoslovakian Army Film Studio (CAFS). It was a new area for me, but I learned fast and used the knowledge for making future teaching films. The 18-min film was finished in 1959 and I presented it at the 9th ICR, International Congress of Radiology in Munich. I was invited by Professor F. Strnad to a lecture on “Splenoportography” there. It was my first trip outside Czechoslovakia and provided me a glimpse of real life in Germany. During my stay, I made friends with a number of angiographers and have remained in contact with them since then. The movie received accolades from the Congress and I received 500 German Marks for my article in a Springer-Verlag book entitled “Röntgendiagnostic der Leber”. I used this money to support my trip to West Germany the following year to discuss our experience with my friends, Professor H. Anacker and Professor L. Wannagat.

Abdominal Organ Portal Venous System German Journal Angiographic Technique German Mark
These keywords were added by machine and not by the authors. This process is experimental and the keywords may be updated as the learning algorithm improves.
This is a preview of subscription content, log in to check access.