Hermeneutics and Phenomenology in Paul Ricoeur 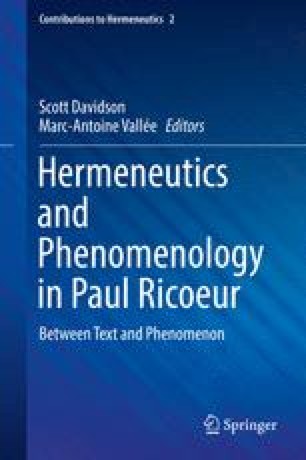 Hermeneutics and Phenomenology in Paul Ricoeur pp 61-74 | Cite as

For a Genealogy of Selfhood: Starting from Paul Ricœur

The aim of the present paper is at the same time extremely broad and very circumscribed: broad, because I deal with the great topic of Ricœur’s mature work, Oneself as Another, that is to say with the dialectics of the self and the other, of selfhood and otherness; circumscribed, because I focus on one of the figures of otherness proposed by Ricœur, specifically the second one – the relation of intersubjectivity –, and I question its “constitutive” relation to selfhood even beyond Ricœur’s perspective, referring for instance to Patočka. In this way, starting from Ricœur’s hermeneutics of the self I retrace and propose a genealogy of selfhood that reveals the other as the essential condition for the constitution of the self. To reach this goal, the paper is divided into four parts: the first one introduces the problem of the “subject” after Heidegger, the second one tackles the issue of the selfhood of the self as it is conceived by Ricœur, the third one analyzes the role of the other and intersubjectivity in the constitution of the self, and the fourth one investigates how and why the other is the key concept for thinking the genealogy of selfhood.