XIV Mediterranean Conference on Medical and Biological Engineering and Computing 2016 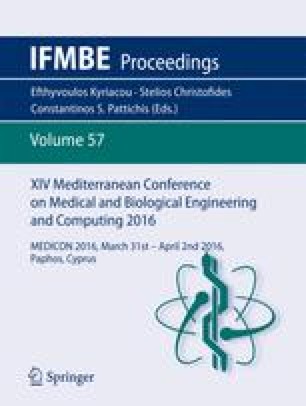 Influence of Electrical Stimulation on the Contraction of Myotubes in Vitro

Study of skeletal muscle cells in culture stimulated by externally-applied electical pulses with different characteristics, constitutes an interesting and potentially useful field still open to further investigation, in order to identify an electrical stimulation protocol that could be used for an optimal stimulation of single cells. On the other hand, previous researchers have demonstrated the usefulness of computer vision application to obtain important quantitative information on the deformation, disruption and development of biological tissues.

In this paper, a method to study the influence that different parameters of electrical stimulation have on the contraction of single skeletal muscle cells stimulated in vitro is described. The investigation was carried out by analyzing image sequences of skeletal myotubes in vitro, stimulated through pulses at different frequencies, intensities and widths. The effects of these three pulse characteristics on the cell contraction responses were examined with the aim of providing a tool that can facilitate the search for an appropriate stimulation protocol that can be used also in clinical applications where prevention of muscle atrophy due to prolonged lack of exercise is desired. The results show that using single electrical stimulation pulses with a long time duration (e.g. 10 ms), as well as a high stimulus amplitude, allows a complete relaxation of the myotubes. In contrast, using a frequency of stimulation higher than 1 Hz prevents complete relaxation leading to sustained contractions.