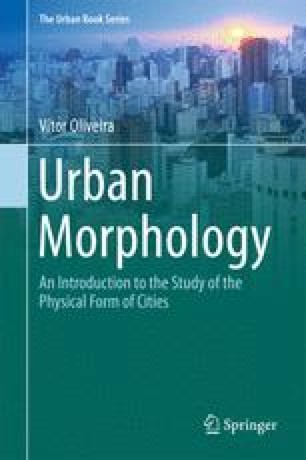 The fifth chapter addresses contemporary cities, with both inherited and emerging urban forms, investigating the main urban agents and city-building processes. Three case studies were selected: three clearly distinct cities, with different weaknesses and threats, and with specific strengths and opportunities. These cities are New York, Marrakesh and Porto. Founded in the early seventeenth century by the Dutch settlers, the city of New York has been continuously growing, in a remarkable process of urban evolution, marked by the 1811 plan (establishing its orthogonal layout), that culminated in today’s magnificent metropolis, structured in five main areas (Manhattan, Brooklyn, Queens, Bronx and Staten Island) and the place of residence for more than eight million inhabitants. The urban forms of Marrakesh are clearly different from the urban forms of New York. Marrakesh, one of the four imperial cities of Morroco, was founded in mid eleventh century by the Almoravids. Ten centuries of urban history are today present in the remarkable medina of Marrakesh. The city with almost one million inhabitants is also composed of areas developed in the twentieth century, such as the Guéliz and the Hivernage neighbourhoods. The urban forms of Porto are very different from the urban forms of the American and Moroccan cities described in this chapter. Founded in mid-eleventh century, as Marrakesh, Porto grew from a small castel town to an area twelve times larger in a period of two centuries. In a unique location facing the Atlantic Ocean and the Douro River it is the second largest city of Portugal and the centre of a metropolitan area with 1.7 million inhabitants.