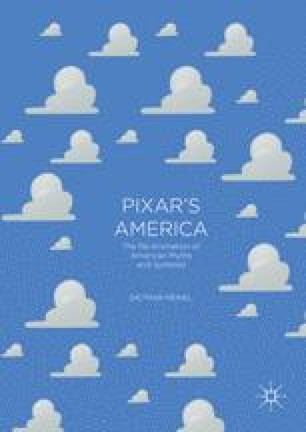 Animating a Yet Unimagined America? The Mediation of American Exceptionalism in Toy Story 3 (2010)

Opening with a camera flight through a breathtaking arid Southwestern landscape, Toy Story 3 (2010) begins with a tracking shot of Mr. and Mrs. Potatohead as the two are about to rob a nineteenth-century train. Before the mischievous couple are able to flee the scene of the crime in a pink corvette, however, the Roundup Gang intervenes to stop the criminals from escaping with their loot. To divert Woody, Jessie, and Bullseye, the Potatoheads blast a nearby bridge to force the trio to save the lives of the innocent troll dolls on the train. As Buzz Lightyear intervenes in the nick of time to prevent a horrible disaster, the sheriff doll, the space-ranger action figure, and their friends continue to pursue the sinister duo. When Piggy Bank suddenly appears in his spaceship to help the two Potatoheads, Slinky Dog hopes to assist the Roundup Gang with his “built-in force field,” and Rex pronounces himself to be “the dinosaur who eats force-field dogs” (Toy Story 3), the opening sequence climaxes in a chaotic hodgepodge of nineteenth-century Western images and futuristic science fiction phantasmagorias.

Bush Administration Presidential Candidate Daycare Center Totalitarian Regime Teddy Bear
These keywords were added by machine and not by the authors. This process is experimental and the keywords may be updated as the learning algorithm improves.
This is a preview of subscription content, log in to check access.