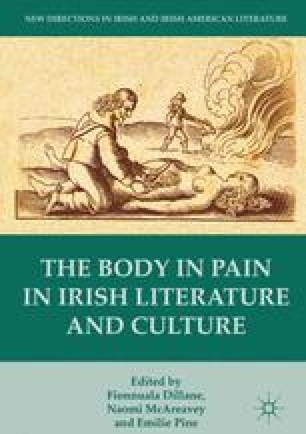 In addition to his enduring commitment to the exilic subject in its many guises, Colum McCann is particularly concerned with the embodied affects of displacement and shared interstices of transcultural memory. Through a discussion of two stories, ‘Cathal’s Lake’, from Fishing the Sloe-Black River (1994), and ‘Hunger Strike’, from Everything in This Country Must (2000), this chapter highlights how McCann’s fashioning of bodies affected by political violence relies heavily on codes—visual and textual—that he transcribes from Jewish history and cultural memory. In this way, we can read McCann’s work as galvanised by what Michael Rothberg has termed ‘multidirectional memory’; his fictions animated by ‘borrowing or adaptation from a history that initially might seem foreign or distant’.1 For both Rothberg and McCann, this ‘productive, intercultural dynamic of multidirectional memory … has the potential to create new forms of solidarity and new visions of justice’.2 McCann’s invocation of multidirectional memory has a twofold ethical impetus. Firstly, in borrowing from Jewish cultural memory to write about Ireland, McCann creates spaces for imaginative, transcultural empathetic relations. Moreover, his intertextual aesthetics—narratives mediated through other narratives—illustrate his remove from the subjects he writes about and ensures he does not appropriate an experiential reality beyond his own.

Jewish History Cultural Memory Jewish Culture Hunger Strike Jewish Experience
These keywords were added by machine and not by the authors. This process is experimental and the keywords may be updated as the learning algorithm improves.
This is a preview of subscription content, log in to check access.