Competition Law Enforcement in the BRICS and in Developing Countries 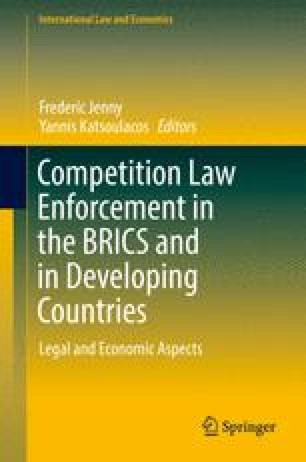 The authors would like to thank Jørgen Elmeskov, Jean-Luc Schneider, John Davies, Alain de Serres, Romain Duval, Pier Carlo Padoan, Giuseppe Nicoletti, Jeremy West, Joao Azevedo, Yunhee Kim, Lorenzo Ciari, Antoine Goujard, and Zsofia Tari for their helpful comments and suggestions, as well as Caroline Abettan and Celia Rutkoski for excellent technical support. The opinions expressed in this chapter are the authors’ and do not necessarily correspond to those of the OECD or its member countries.

Presentation of the More Disaggregated Set of Indicators (Set 2)

Scoring of the questions on competences

The range of investigative powers available to the institutions that enforce competition law influences their ability to protect competition. This indicator is an average of six observations assessing whether it is possible to obtain information by compelling firms and third parties to cooperate, as well as by performing unannounced inspections (Table 8). If the competition agency or courts can compel firms and third parties to provide information to help with an investigation on an antitrust infringement or a merger, the jurisdiction is scored 0 (6 otherwise). If unannounced inspections are possible, the jurisdiction is scored 0 (6 otherwise). A de facto question asks whether at least one unannounced inspection has been performed in the past 5 years (if yes, the jurisdiction is scored 0, if not it is scored 6).
Table 8

Scoring of the questions on powers to investigate

Powers to Sanction and Remedy

For an effective competition regime it is also important that the institutions enforcing competition law have sufficient powers to punish or remedy behaviours and mergers that restrict or distort competition. This indicator is an average of ten questions dealing with the powers to take action against anticompetitive behaviours and mergers (Table 9). The actions covered by the indicator include imposing sanctions and remedies for antitrust infringements, blocking or remedying anticompetitive mergers, limiting the cost of the procedure by shortening the length of the investigative process and reducing the damages that such behaviours can cause by imposing interim measures. A jurisdiction is scored 0 if these actions are possible and 6 otherwise.42 One de facto question is also included: a jurisdiction is scored 0 if the agency or courts have imposed sanctions on firms that have hindered an investigation at least once over the past 10 years.
Table 9

Scoring of the questions on powers to sanction and remedy

The ability of a competition regime to deter anticompetitive behaviours is strengthened by the possibility for the damaged parties to receive financial compensation through private litigation. If private actions (started by firms, individuals, or groups of consumer directly affected by the antitrust infringement) are not authorised, the jurisdiction is scored 6. The score is 3 if they are allowed for some antitrust infringements, 0 otherwise (Table 10).
Table 10

Scoring of the questions on private enforcement

Provisions covering horizontal and vertical agreements are assessed by two separate indicators, computed as the simple average of respectively seven and four observations (Tables 11 and 12). A jurisdiction is scored 0 if horizontal/vertical agreements are prohibited. Competition regimes that carry out economic analysis of the effects of horizontal and vertical agreements and consider any efficiency they may cause are scored 0 (6 otherwise). Two de facto questions, which aim at measuring the enforcement of the competition law, are also included. If action has been taken against vertical or horizontal agreements at least once over the past 5 years, the jurisdiction is scored 0 (6 otherwise). A well-designed leniency programme is a key instrument for destabilising cartels. If a leniency programme exists and if it has generated at least one application over the last 5 years the jurisdiction is scored 0 (and 6 otherwise).
Table 11

Scoring of the questions on horizontal agreements

Scoring of the questions on vertical agreements

The indicator on merger control is based on three questions (Table 13). It assesses whether an economic analysis is performed to determine when to clear or block a merger and whether efficiencies are taken into account in the assessment of the merger. If an economic analysis is performed, if efficiencies are taken into account, the jurisdiction is scored 0 (6 otherwise). Also the jurisdiction is scored 0 if at least one merger has been blocked or cleared it with remedies over the past 5 years.
Table 13

Scoring of the questions on mergers

The indicator on exclusionary conducts is based on five questions (Table 14). Exclusionary conducts can be defined as business practices by a dominant firm that result in effective access of actual or potential competitors to supplies or markets being hampered or eliminated. For instance, practices that might strengthen or establish entry barriers, predatory pricing, tying and bundling, refusal to supply and rebates may be exclusionary. If exclusionary behaviours by dominant firms are prohibited, if sanctions or remedies have been imposed on a firm for this motive at least once over the past 5 years, the jurisdiction is scored 0 (6 otherwise). Jurisdictions are also assessed on whether an economic analysis is performed and on whether efficiencies are taken into account in the assessment of the exclusionary conduct (they are scored 0 if yes and 6 otherwise).
Table 14

Scoring of the questions on exclusionary conducts

The overall score on this indicator is the simple average of six de facto components assessing whether the government has influenced the activities and decisions of the institutions that enforce competition law over the past 5 years (Table 15). A jurisdiction is scored 6 if the government has given binding directions: on the opening or closure of an investigation, on the remedies imposed for an antitrust infringements, on the market studies to be undertaken, or if it has overridden at least one decision regarding the clearance or the prohibition of a merger at least once over the past 5 years (0 otherwise). 43
Table 15

Scoring of the questions on independence

Four questions are related to the accountability of institutions enforcing the competition law (Table 16). They assess how much information on competition enforcement activities is made available to the public and whether all decisions can be subject to judicial review. The score is 0 if the agency publishes a report on its activities, if all decisions that ascertain the existence of an anticompetitive behaviours and that block or remedy mergers are published and if all antitrust decisions can be appealed. The jurisdiction is scored 6 if there is no report on the activities of the agency and if decisions are not published and cannot be appealed. If only some decisions on anticompetitive behaviours and mergers are published and not all antitrust decisions can be appealed, the score is 3.
Table 16

Scoring of the questions on accountability

This indicator assesses whether parties under investigation have access to information on the procedures and have the possibility to present arguments for their defence. It is the simple average of ten observations (Table 17). If the agency publishes guidelines on procedures to help businesses and legal advice in understanding how the competition law is enforced, the jurisdiction is scored 0 (6 otherwise). Guidelines are defined as explanatory documents that help business, their legal advisers and the public to understand how the competition law will be applied. They should be separated from the law, comprehensive, and easily accessible by interested parties. For EU Member States, since the European Commission has published its own guidelines, the following rule applies: if the national competition authorities do not publish their own guidelines but rely on guidelines published by the EU Commission, the national authorities are scored 0 only if they have explicitly adopted the EU guidelines or if the law explicitly says that the authorities will interpret competition law in accordance with the principles of the European Commission. If the parties have the right to consult the agency to have information on the procedures and to be heard by the decision-making in defence of their case, the jurisdiction is scored 0 (6 otherwise).
Table 17

Scoring of the questions on procedural fairness

Scoring of the questions on advocacy

Presentation of the More Aggregated Set of Indicators (Set 1)

In the first set of indicators, information is relatively more aggregated and the four indicators cover more general features of the competition policy compared to indicators in the second set but the scoring system is the same.

This indicator relates to the scope of action that enforcing bodies have in investigating, punishing and remedying anticompetitive behaviours and mergers. It is computed as the simple average of the same questions used in the indicators on ‘competences’, ‘powers to investigate’, ‘powers to sanction and remedy’ and ‘private enforcement’ from the second set.

The probity of investigation is another important feature for effective competition regimes as it guarantees the soundness and fairness of the investigations. The indicator is constructed as the average of the observations contained in the indicators on ‘independence’, ‘accountability’ and ‘procedural fairness’.

Scoring of Questions That Are Not Applicable

Egypt and Luxembourg do not have a merger control regime and thus some of the questions relative to mergers cannot be answered by these jurisdictions. The treatment of these missing answers has been different depending on what each indicator is intended to measure (Table 19). When the questions refer to the power to sanction and remedy anticompetitive mergers, the missing answer is scored 6. This is because the related indicators are intended to capture the powers of the institutions and not having a merger control regime is by definition a limitation of these powers. By contrast, no score is attributed to the missing answers relating to independence, procedural fairness, and accountability, because these indicators aim at assessing the enforcement of existing policies, hence if there is no merger control regime, its enforcement cannot be evaluated. These missing values are ignored when computing the indicators (i.e. the average is calculated over the available data points, adjusting the weights accordingly) (Tables 20 and 21).
Table 19

Note: This table presents how the questions related to mergers are scored for countries which do not have a merger control regime. A dot means that no score is attributed

CLP indicators—set 2. 0 to 6 from the most to the least effective competition regime

National competition laws and policies for EEA countries—set 2. 0 to 6 from most to least effective competition regime

This section provides some details on the factor analysis used in Sect. 3 of the main chapter to test the sensitivity of the CLP indicators to the choice of equal weights for aggregation. Factor analysis allows identifying the contribution of each component of the regulatory framework to the overall variance of the data (each component being captured by one question in the questionnaire). The contributions can be used as weights to compute the indicators, meaning that the largest weights are assigned to those questions that have the largest variation across countries. This technique was used by Nicoletti et al. (1999) to construct the first set of PMR indicators.

The factor analysis is applied to the four more aggregated indicators, i.e. ‘scope of action’, ‘policy on anticompetitive behaviours’, ‘probity of investigation’, and ‘advocacy’. Determining the contribution of each question to the variance of the data—and thus the weight of each question in the indicator—involves the following three steps:
The use of factor analysis can be illustrated with example of the indicator of scope of action. This indicator includes 21 questions, including 5 for which all jurisdictions have the same scores. The variance of the observations for these five questions is null and they are thus dropped from the analysis. As a result, the factor analysis is applied to 16 questions and computes 16 factors. Five factors with an eigenvalue larger than unity (Kaiser criterion) and jointly accounting for 75 % of the total variance are retained (Table 22).
Table 22

Factor extraction for the indicator of scope of action

Loadings and weights obtained for the indicator of scope of action