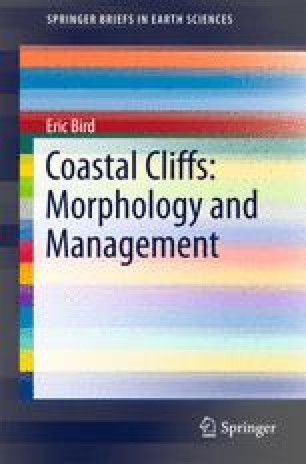 Cliffs are related to geological structure and rock types, and have evolved in response to tectonic movements of the land and changes in sea level. Their profiles are influenced by rock resistance, hinterland topography, exposure to wave action and the effects of coastal processes. Steep vegetated coastal slopes, termed bluffs, are generally former cliffs degraded by weathering; most are stable, but some are subject to occasional landslides. Slope-over-wall coasts occur where a weak formation (such as clay) rests upon more resistant rock, or where a coastal slope has been undercut by marine erosion; in high latitudes the slope may be inherited from prior weathering during periods of cold climate.

Fault Plane Resistant Rock Coastal Slope Land Uplift Marine Erosion
These keywords were added by machine and not by the authors. This process is experimental and the keywords may be updated as the learning algorithm improves.
This is a preview of subscription content, log in to check access.