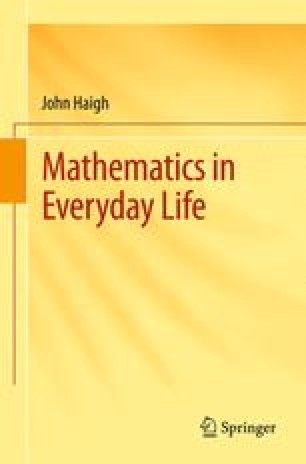 It may surprise many people how often mathematical ideas arise in popular TV game shows, either in pointing the way towards good tactics, or simply adding to the viewer’s enjoyment. The general idea of the Utility of a sum of money, rather than its actual amount, has a strong influence on whether a contestant will play safe, or take a riskier but potentially more rewarding path. We look at (of course) “Monty Hall’s” game, but also its extension to more then three boxes; maths comes up in “The Price is Right”, both in making sensible guesses at the value of prizes, and in the final part, when three contestants spin a giant wheel, seeking the largest score from one or two spins without going over the score 100. Newer games such as “Pointless” and “Two Tribes” throw up subtle but interesting maths—how really unlucky could a contestant be, or how a game could be made fairer to all players. Utility can explain many actions in the “Million Pound Drop”, “Deal or No Deal”, and “Who wants to be a Millionaire?”, and we consider at what stage contestants in “The Weakest Link” should bank the accumulated funds. The idea of Backwards Induction, applied to the short-lived “The Colour of Money”, proves that there was some optimal strategy at all stages of the game. Several formats have used variations on the well-known “Prisoner’s Dilemma” to split, or share, a prize. Teams of different sizes might arise in some formats, (in pub quizzes, can we find a good handicapping system to use?).

Correct Answer Final Round Large Team Golden Ball Original Choice
These keywords were added by machine and not by the authors. This process is experimental and the keywords may be updated as the learning algorithm improves.
This is a preview of subscription content, log in to check access.

Following Grosjean (1998), we analyse the three-person “Spinning” game, with a wheel giving values in the continuous range [0, 1]; each player may take one spin, or two spins, but is eliminated with a score of zero if the second spin takes the total above unity.

We now work backwards. Suppose the best outcome by the first two is x. The argument above shows that the chance Carla wins is \(1-x^2\).

What will x be? Suppose Brian has a score of y, already bigger than Adam’s score. Should he spin again? If he does not, his winning chance is plainly \(y^2\), so see what happens if he does take a second spin.

So Brian spins whenever he is behind Adam, or when he is ahead of Adam, but his score is less than \(\alpha \).

Adam can work this out, so what action should he take, with an initial score of z? If \(z<\alpha \), he must spin again—he would do so to maximise the chance of beating one opponent, let alone two. So assume \(z\ge \alpha \). Should he spin?

We now find their respective winning chances. Calculation is a little complex, but a good computer will spit out as many random numbers, i.e. scattered uniformly over the range (0, 1), as we like, so Grosjean simulated this game 20 million times to get reliable answers. The respective winning chances came out as close to 30.5, 33 and 36.5 %, very close to the values found by Coe and Butterworth in the real game.