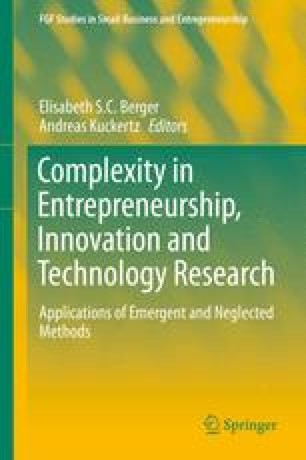 Complexity in Entrepreneurship, Innovation and Technology Research pp 117-137 | Cite as

This chapter reviews a line of research that studies several different theoretical questions in entrepreneurship through novel applications of computer simulation. All of the simulation studies reviewed are based on a shared game-theoretical modeling framework that allows a high level of integration with existing theories. What made these simulations unique was their firm grounding in the theory of the entrepreneurial market process from Austrian economics, and the lack of previous simulation studies in the entrepreneurship field. The focus is on how and why the cooperative game theory framework was chosen, the justification and process of applying the simulation method and the lessons learned from doing so. The aim is to provide entrepreneurship scholars with a better understanding of where and why computer simulation may add something of value to their research as a tool for the analysis of complex systems. The reviewed studies involve artificial economies with a small number of agents, demonstrating that the emergence of complex macro patterns from micro behaviors does not require large numbers of agents.

Appendix: Overview of the Littlechild Model

While the use of cooperative game theory has proliferated in the strategic management field in recent years, the entrepreneurship field has not seen such activity. One particular contribution that has remained underappreciated in the literature (Foss, 2000) is Littlechild’s (1979b) paper titled ‘An entrepreneurial theory of games’ that aims to take a step in capturing some elements of the entrepreneurial market process as described in the Austrian school of economics within the characteristic function game framework. In this appendix, we take a closer look at this paper’s model, and consider how it may serve as a basis for further research. The paper is a mix of informal narrative accompanied by some formal modeling. While the formal modeling does not cover all of the subjectivism and process dynamics discussed in the narrative, it does provide a basic framework that may be built on.

Active players are those who may propose offers to other players. Their behavior in looking for opportunities and proposing offers in order to exploit them justifies their labeling as entrepreneurs in the Austrian sense. The remaining \( n-m \) players are passive, meaning that they may only accept or reject offers proposed to them, and do not actively seek opportunities or propose offers to others. Non-zero values for single-player coalitions are not necessary, as the game can be zero-normalized. However, having these non-zero values helps in the intuitive understanding of why a player may choose not to form any coalitions with others. Littlechild continues (p. 155):

And payoffs are distributed as follows (p. 157):

Although Littlechild does not run a dynamic simulation of the game, the only remaining elements needed to actually run the game are the strategies of the players. The strategies of active players consist of who to offer to, how much to offer them, and how to revise these in each new period, while the strategies of passive players consist of how to set reservation prices and how to revise them in each new period until an offer is accepted. Littlechild does not determine any particular way for the passive agents to set reservation prices, stating only that if they eventually start decreasing their reservation prices by at least a fixed minimum amount in each period, the game is guaranteed to end in finite time. As for the entrepreneur’s strategy, Littlechild suggests that if the entrepreneur had a guess for the price it would take to attract each passive player, then the following method could be used for choosing who to offer to, and how much to offer them (p. 156):

…Finally, set
$$ {p}_j^i(t)=\left\{\begin{array}{c}\hfill {\hat{p}}_j^i(t)\kern0.5em for\kern0.75em j\in {D}_i(t)\kern3.5em \hfill \\ {}\hfill 0\kern2.5em for\kern0.75em j\in A(t)-{D}_i(t).\hfill \end{array}\right. $$
(9)
Littlechild does not determine any particular way by which entrepreneurs may arrive at their guesses or revise them, although some suggestions are implied in that paper’s narrative arguments. Note that there is no cost to making an offer, and no limit on the number of offers an entrepreneur can make in each period.