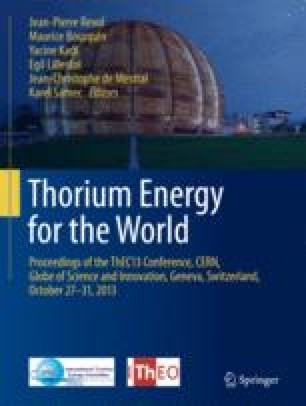 A Future for Thorium Power?

The expected duration of today’s nuclear reactors, even if persisting at the present relatively low level of 5 % of the primary energy supply, is not appreciably longer than that for energy systems using natural gas and oil and is much less than that for those employing coal. There is no doubt that, for its continued usage, nuclear power must be profoundly modified. For instance, new breeding reactions based on tritium, natural uranium or thorium, which may last for many thousands of years, far beyond fossil fuels, must be pursued, together with much stricter safety levels and a deterministic safety approach. Amongst the breeding alternatives, the use of thorium represents a unique opportunity. The advantages of thorium burning are remarkable; especially if one considers that the same amount of electric energy may be produced from 3 million tons of coal, from U-235 extracted from about 200 tons of natural uranium, or from merely one ton of the vastly abundant natural thorium. Used in an accelerator-driven system, thorium opens options for a safe nuclear power, with a considerably simplified fuel cycle, significantly minimized production of long-lived nuclear waste, as well as the possibility of destroying existing nuclear waste and stockpiles of military plutonium. My own recommendation is to construct a full-scale industrial 600 MWe subcritical thorium demonstrator, along the lines of the Energy Amplifier engineering design by Aker Solutions ASA, but using salt instead of metal, and at a cost far less than 10 % of what is presently invested in the ITER (International Thermonuclear Experimental Reactor) for fusion. A simplified fuel reprocessing concept may consist of considering the spent thorium, fission fragments, and minor actinides (Pa, Np, Am, and Cm) as “waste” and uranium and plutonium as “seeds”. The duration of each fuel cycle would be about ten years and the reactor lifetime could exceed 200 years.

Molten Salt Fuel Cycle Fission Fragment Natural Uranium International Thermonuclear Experimental Reactor
These keywords were added by machine and not by the authors. This process is experimental and the keywords may be updated as the learning algorithm improves.
This is a preview of subscription content, log in to check access.