Diseases in the Elderly 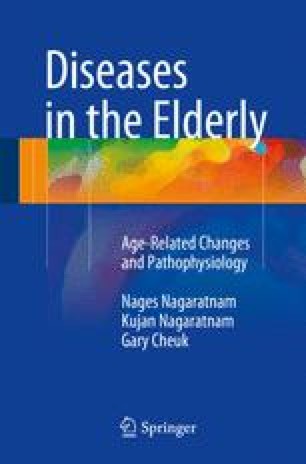 Cardiovascular Disease and Related Disorders in the Elderly

Cardiovascular diseases are common in the elderly and their incidence and prevalence increase with advancing years. Normal ageing is associated with both structural and functional changes. The more significant changes that occur in the cardiovascular system with ageing involve the myocardium, valves, pacemaker and the arterial system. The cardiovascular diseases included in this chapter are heart failure, cardiac arrhythmias, coronary artery disease, valvular diseases, infective endocarditis, hypertension, peripheral vascular disease and related disorders. The pathophysiology underlying them is discussed in relation to the anatomical and physiological changes that occur with ageing. There is a reduction in the number of myocytes and increase in left ventricular thickness resulting in reduced diastolic filling and hypertrophy of the atrium. There is stiffening of the aortic and mitral annulus resulting in aortic sclerosis and mitral incompetence and intimal hyperplasia and thickening of the arteries leading to an increase in systolic pressure and systolic hypertension. The electrical characteristics of the conducting system also change with age, and the time of conduction through the AV node is increased and hence the P-R interval increases with age. With age, the walls of the peripheral vessels become thicker and stiffer.

Anatomical and Physiological Changes with Aging

Cardiac Arrhythmias in the Elderly

Infective Endocarditis in the Elderly

Coronary Artery Disease in the Elderly

Valvular Heart Disease in the Elderly

Hypertension and Hypertensive Heart Disease in the Elderly