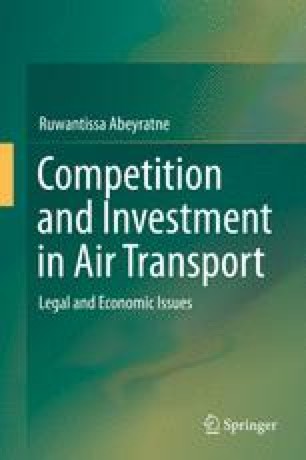 Competition and Investment in Air Transport pp 37-51 | Cite as

Competition and the Environment

Naomi Klein correctly observes that climate change poses an expansive challenge to the industrial capitalist economic system. This in turn affects competition and development as well as economic growth of States. In the aviation context, economic instruments enforced on the polluter would affect the competitive advantage airlines face, which has spawned a strong argument among developing countries, mostly those termed “emerging economies” who claim that developed countries, which are largely to be blamed for global warming with their industrialization over the nineteenth and twentieth centuries must bear more of the burden of recouping the damage. This argument may have some justification that goes back to the eighteenth century where population economist Thomas Robert Malthus drew a threefold distinction between material, immaterial and non-economic goods, the last being goods that were, although material, destitute of economic value and therefore did not form part of the political economy. To this category belonged air, water, the elasticity of steam and the pressure of the atmosphere which, being devoid of the capacity of being politically controlled could be used untrammelled and with impunity by States. These goods affect the present day environmental economics and are given a value by climate change economics, giving rise to such economic instruments such as environmental taxes and other market based measures.

United Nations Environment Programme Emission Trading Scheme International Civil Aviation Organization Emission Unit Multilateral Treaty
These keywords were added by machine and not by the authors. This process is experimental and the keywords may be updated as the learning algorithm improves.
This is a preview of subscription content, log in to check access.