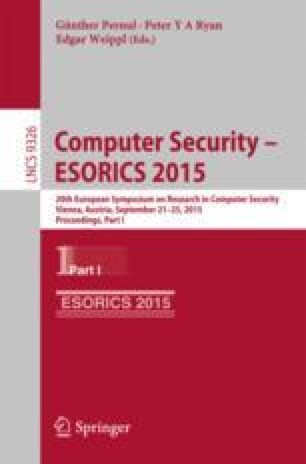 Markup Injection (MI) attacks, ranging from classical Cross-Site Scripting (XSS) and DOMXSS to Scriptless Attacks, pose a major threat for web applications, browser extensions, and mobile apps. To mitigate MI attacks, we propose JSAgents, a novel and flexible approach to defeat MI attacks using DOM meta-programming. Specifically, we enforce a security policy on the DOM of the browser at a place in the markup processing chain “just before” the rendering of the markup. This approach has many advantages: Obfuscation has already been removed from the markup when it enters the DOM, mXSS attack vectors are visible, and, last but not least, the (client-side) protection can be individually tailored to fit the needs of web applications.

JSAgents policies look similar to CSP policies, and indeed large parts of CSP can be implemented with JSAgents. However, there are three main differences: (1) Contrary to CSP, the source code of legacy web applications needs not be modified; instead, the policy is adapted to the application. (2) Whereas CSP can only apply one policy to a complete HTML document, JSAgents is able, through a novel cascading enforcement, to apply different policies to each element in the DOM; this property is essential in dealing with JavaScript event handlers and URIs. (3) JSAgents enables novel features like coarse-grained access control: e.g. we may block read/write access to HTML form elements for all scripts, but human users can still insert data (which may be interesting for password and PIN fields).

JSAgents Content Security Policy (CSP) Attack Vectors JavaScript Event Handler Markup
These keywords were added by machine and not by the authors. This process is experimental and the keywords may be updated as the learning algorithm improves.
This is a preview of subscription content, log in to check access.

Client-side XSS Filters. JSAgents is not a classical XSS filter. This is due to the fact that each and every XSS filter must be able to make distinctions between user-supplied and application-supplied markup. Conversely, JSAgents only sees the combination of both (aside from common DOMXSS sources and sinks like location.href). However, by employing an approach inherently different from that of any common XSS filters, JSAgents can reliably mitigate several kinds of XSS and markup injection – including DOMXSS and, in part, Scriptless Attacks. If a web application uses third-party input to build some parts of the DOM tree, regardless of whether it is user-supplied, stored, or DOM-based (e.g., document.URL, document.href, document.referrer), it may specify a white-list of the allowed HTML elements for that very part of the DOM tree. Any other type of element will be deleted by JSAgents. Thus, if JavaScript execution and other potentially malicious HTML5 elements are not allowed in certain parts of the website, these attacks will be blocked. An example of this approach is given in Sect. 5, where a common webmail application assumes that the Iframe containing the body of the rendered email should not contain any active markup.

HTTPonly Cookies. By setting the JSAgents directive read-access: false for properties such as document.cookie, we effectively turn any cookie into an HTTPonly cookie, so that document.cookie can no longer be accessed by scripts. Similar access control can be imposed on form elements to prevent malicious script from stealing its contents or sniffing keystrokes.

Sandboxed Iframes. In their default configuration, sandboxed Iframes have a virtual origin that is different from any other kind of origin. By default, they neither allow script execution nor form submission and they are not permitted to navigate the top level frame (although those restrictions can be lifted gradually). Two of these properties can easily be modeled with JSAgents: We can remove all script and form elements from a selected Iframe. Sandboxed Iframes, however, feature additional properties to gradually release the default security constraints. In its current state JSAgents is not yet able to emulate this functionality.

HTTP Leak Detection/Proxy Injection. Since JSAgents is targeting extractability, it is capable of detecting HTML elements that attempt to load external resources. Depending on the use case, leaking information via direct HTTP requests might compromise privacy promises of a web application. This especially holds for web-mailers and web proxies, where a HTTP request sent to an arbitrary URL or IP would leak user data and timing information, essentially enabling localization and tracking. JSAgents can be instructed to change any of the existing URLs that point to external resources to be prefixed with a proxy URL. This would mean that leakage of sensitive user data is avoided.

Content Security Policy 1.0. Large parts of CSP 1.0 can be implemented and extended with the use of JSAgents. This is achieved by creating a policy that prohibits any form of inline scripting, objects, embeds and applets, while implementing a prefix for external resources (or simply blocking the use of external resources that are coming from a non-whitelisted domain). Therefore, one possible application scenario is to (partly) implement CSP in legacy browsers. However, since JSAgents is not part of the browser core, it is less resistant to higher-privilege attacks (e.g., web injections by local malware). JSAgents can be used as a CSP replacement in browsers that do not support it and as a CSP supplement in browsers with partial or full support.
Table 2.

The code instances in Listings 1.9 and 1.10 show how an example CSP policy can be emulated using JSAgents, even if the browser itself does not support CSP.

CSP 1.1 Script Nonces. Introduced with CSP 1.1, script nonces are a way to permit execution of only those (inline) script elements that have a nonce attribute with a value identical to a nonce value transmitted in the HTTP header. This makes inline script injection nearly impossible. In cooperation with the web application, JSAgents, inspired by Noncespaces [18], can achieve the same goal: Inline scripts are marked with a fresh nonce value by the web application and the same nonce value is written into a copy of the configuration file. As a result of the jsa.js execution with this unique policy, all inline scripts unmarked with the nonce value from the configuration file will be deleted (Table 2).