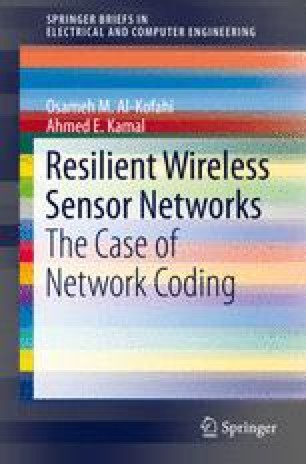 Network coding is a generalization of routing and allows network nodes to combine data units from different packets instead of forwarding the packets as is. This means that a node needs to correctly receive and decode the packets first to obtain their data content. After that, the data can be combined and sent from the node. In this case, the coding process takes place in the electronic domain after obtaining the actual bit representations of the data in the packets. This type of coding is known as Digital Network Coding (DNC), and it is the dominant coding strategy. Alternatively, Analog Network Coding (ANC) [1] utilizes interference of packets and carries the coding (combining of data) process in the electromagnetic domain at the physical layer. That is, it does not require the successful reception of the packets or their actual bit representations.

Analog Network Coding (ANC) Electromagnetic Domain Vertex Coloring Problem Node Code Leaf Combinations
These keywords were added by machine and not by the authors. This process is experimental and the keywords may be updated as the learning algorithm improves.
This is a preview of subscription content, log in to check access.