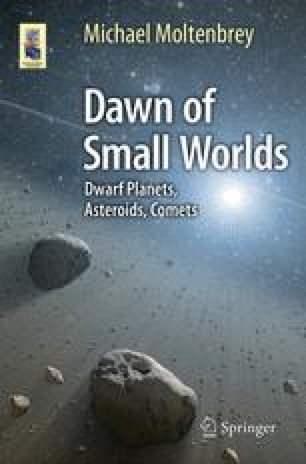 As we have already seen in previous chapters, there are a vast number of objects that form part of our solar system. These objects have been continuously categorized and re-categorized after new scientific findings had emerged. In 1801, when Ceres was discovered in the “gap” between Mars and Jupiter, it was initially seen as the “missing planet” that was supposed to be there following the Titius-Bode-Law. It was therefore assigned a planetary symbol. However, during the following decades more and more objects like Ceres were discovered in that region. Thus, the astronomers decided to re-classify Ceres into the newly created category of asteroids (“star-like objects”). Science made huge progress and with it the need and wish to re-classify Ceres resurfaced again. This time promoting it into the class of dwarf planets. These had recently been introduced by the International Astronomical Union (IAU).

Solar System Atmosphere Atmosphere Hubble Space Telescope Kuiper Belt Outer Solar System
These keywords were added by machine and not by the authors. This process is experimental and the keywords may be updated as the learning algorithm improves.
This is a preview of subscription content, log in to check access.