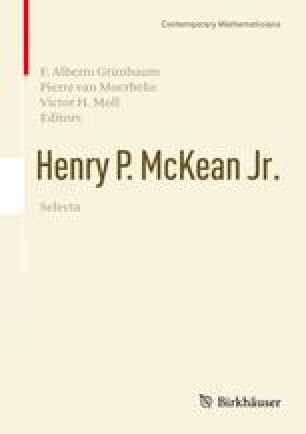 Some Words from Three Students

Henry writes that he has been very lucky in his mathematical life.

I am sure that the sentiment is shared by the many youngsters who, like myself a long time back, some way or another ended up becoming one of his graduate students.

When I was in my third year of college in Córdoba, Argentina, having just decided to switch from physics to mathematics, we had a short visit from A.P. Calderón. A couple of us took him out for a cup of coffee to get advice as to what to do after graduation. I told him very openly that I wanted to pursue some combination of analysis, physics, and (my new love) probability theory. I had just discovered the book by W. Feller. Calderón was not an impulsive man, but it took him about one second to say “I know the guy for you: Henry McKean”.

Riemann Surface Courant Institute Pine Barren Chilean Winter Hyperelliptic Riemann Surface
These keywords were added by machine and not by the authors. This process is experimental and the keywords may be updated as the learning algorithm improves.
This is a preview of subscription content, log in to check access.