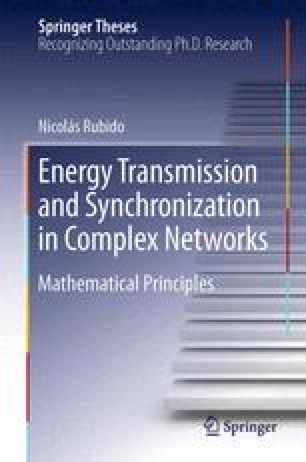 This chapter contains known definitions and (a few novel) results from Network Theory. This thesis is based on the mathematical background, the concepts, the network characterisation methods, and the results we present here. Hence, this chapter constitutes the methods we use to address the problem of the transmission of energy and synchronisation in complex networks. Specifically, our results on the transmission of energy are based on the knowledge and understanding of the network structures where the energy is transmitted and our results on synchronisation are mainly based on the topological and functional way the dynamical units are interconnected to form a complex network.

Reports of the death of reductionism are greatly exaggerated. It is so ingrained in our thinking that if one day some magical force should make us all forget it, we would promptly have to reinvent it. The real worry is not with reductionism, which, as a paradigm and tool, is rather useful. It is necessary, but no longer sufficient.

[...] Indeed, forced by an imminent need to go beyond reductionism, a new network-based paradigm is emerging that is taking science by storm. It relies on datasets that are inherently incomplete and noisy. It builds on a set of sharp tools, developed during the past decade, that seem to be just as useful in search engines as in cell biology. It is making a real impact from science to industry. Along the way it points to a new way to handle a century-old problem: complexity.