Earth's Early Atmosphere and Oceans, and The Origin of Life 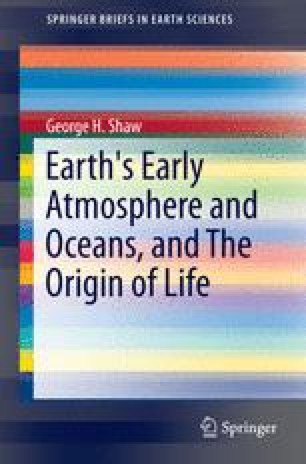 Earth's Early Atmosphere and Oceans, and The Origin of Life pp 63-67 | Cite as

Evolution of the Atmosphere During the Hadean and Archean

The main reservoir for surface carbon on the Hadean/Archean Earth was in the form of organic molecules dissolved in sea water, floating as a scum on the ocean surface, or deposited as sediment on the sea floor. Some fraction would also have been found in water bodies on whatever emergent land had been produced at any given time, and probably a tiny fraction was actually on the land surface. At present most carbon is found in carbonate rocks, and is highly oxidized by comparison. To get from the early Earth to the present situation implies a very large amount of oxidation. The fundamental cause of this oxidation was loss of hydrogen to space. Comparing current hydrogen production rates in volcanoes to current loss rates to space underlines the changes that have taken place on Earth. Modern hydrogen production is about 100 times greater than loss to space, reflecting the consumption of volcanic hydrogen by oxidation in the atmosphere before it can reach the higher levels from which it can escape. During the Hadean/Archean the oxygen-free atmosphere would have allowed hydrogen (and its compounds with carbon, nitrogen and oxygen) to transport much larger amounts of hydrogen to the upper atmosphere, supporting the hydrogen loss necessary to eventually result in oxidation of most of the carbon compounds. A average hydrogen loss rate about 1000 times the present-day value would provide enough net oxidation to achieve the requisite oxidation, including oxidation of reduced elements freed up by weathering and erosion of rocks. The factor of ten compared to current volcanic production rates can be more than made up for by higher early heat flow and production of reduced compounds by cycling sea-water organics through sea-floor hydrothermal systems. In all likelihood Hadean hydrogen production was higher than in the late Archean, but starting from a highly reduced state and ending with much more oxidized conditions some 2 billion years later is not a problem.

Hydrogen Production Hydrothermal System Carbon Carbon Hydrogen Loss Radiogenic Heat Production
These keywords were added by machine and not by the authors. This process is experimental and the keywords may be updated as the learning algorithm improves.
This is a preview of subscription content, log in to check access.