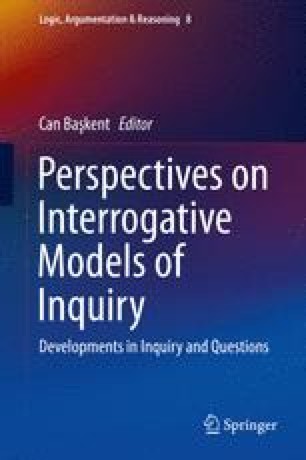 Perspectives on Interrogative Models of Inquiry pp 129-161 | Cite as

A Dynamic Logic of Interrogative Inquiry

This paper has been presented at the Interrogative Model of Inquiry Seminar in Paris (France, September 2011), the Questions, Games, Logic Workshop in Amsterdam (the Netherlands, December 2011) and the Trends in Logic XI Conference in Bochum (Germany, June 2012). I would like to thank the audiences of these events for helpful feedback and comments. I have benefited from discussions of this work with Johan van Benthem, Can Başkent, Emmanuel Genot, Eric Pacuit, Ştefan Minică, Gabriel Sandu, and Fernando Velázquez-Quesada. I am particularly grateful to Fernando Velázquez-Quesada for suggesting many substantial improvements on an earlier version of this paper. Finally, I am thankful to two anonymous reviewers for their comments and suggestions. The author of this paper acknowledges support from a doctoral fellowship of the Research Foundation Flanders (FWO).

Let P be a countable set of atomic propositions. An epistemic model is a tuple \(M =\langle W,\sim,V \rangle\) where:

The set of valid formulas of \(\mathcal{E}\) on the class of epistemic models can be axiomatized using the following axiomatic system EL:

The logic EL is given by the following axiomatic system:

Then, we have the following completeness result for EL with respect to the class of epistemic models:

EL is strongly complete with respect to the class of epistemic models.

B Proofs of Propositions 1, 2 and Lemma 1