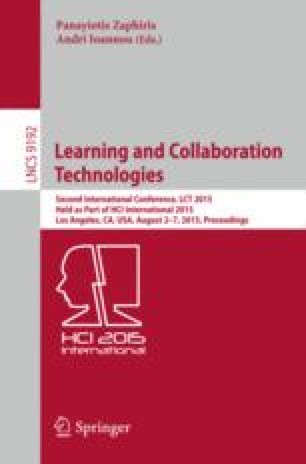 CyberPLAYce, A Cyber-Physical-Spatial Storytelling Tool: Results from an Empirical Study with 8-10-Year-Old Storytellers

The product of a multidisciplinary and iterative process, CyberPLAYce is an interactive, portable learning tool for children enhancing personal and computational expression, and particularly, playful storytelling. CyberPLAYce finds inspiration in the concept of embodied child-computer interaction, where meaning is constructed through spatially reconfiguring the physical environment. This paper briefly outlines the motivations for CyberPLAYce, and focuses on an iterative design, mixed-methodology and usability studies involving 8-10-year-old storytellers. The kinds of digital-physical-spatial activity afforded by CyberPLAYce promise to scaffold thinking, imagining, creating, and sharing in children. Lessons learned from this research-through-design case will aid members of the HCI International community as they design and test tools for our youngest learners.

We describe the design and evaluation of CyberPLAYce, (Fig. 1), a novel, interactive, computational learning tool for children and their teachers. CyberPLAYce aims to bridge physical and digital worlds, allowing children to make storytelling tangible through the spatial manipulation of cyber-physical elements.

CyberPLAYce was designed as a 21st century version of House of Cards (Fig. 2) designed by famed American designers Charles and Ray Eames in 1953. House of Cards is an oversized deck of cards featuring imaginative patterns and pictures on their surfaces that children join together to give form to their thoughts through spatial construction. CyberPLAYce also builds upon the concept of embodied, child-computer interaction [1], where “meaning is created through restructuring the spatial configuration of digital-physical elements in the environment” [2]. With CyberPLAYce, “an object-to-think with” [3], children explore concepts through bodily, cyber-physical interaction. CyberPLAYce was introduced at the CHI’14 Video Showcase [4]; but this paper is the first to present the usability results of the empirical study.

Research shows that well-developed play has positive impacts on the development of children [5]. The concept of play has extensively been considered and cultivated within the HCI community [6, 7, 8, 9]. CyberPLAYce is particularly targeted at developing children’s personal and computational expression. CyberPLAYce promotes children’s active involvement and imagination in creating their own play activity which is in alignment with Caillois’s paidia play [6, 7], where play is open and affords uncontrollable imagination while giving life to fantasy worlds using physical-digital elements (see, e.g., [10, 11]). CyberPLAYce takes inspiration from research on storytelling in the field of HCI [12, 13] that specifically highlights storytelling as a creative activity: in PETS [14], child-assembled, augmented toys support emotional expression as children create and tell stories; in StoryMat [15], children move around a blanket while they make stories with tangible objects; and in StoryRoom [16] and POGO [12] children play with tangibles offering visual and sound effects that guide the storytelling activity. Collectively, this prior research suggests the promise of tangibles as tools for children to creatively express themselves, to construct meaning, to learn new knowledge, and to communicate during storytelling activities. Our tangible learning tool, CyberPLAYce, novel for expanding tangibles into the dimension of space, aims to merge play and learning in the physical world while transitioning children from consumers of virtual and digital-centric technologies into technological innovators and cyber-playful storytellers.

Our design-research team initially explored the potential of linking tangible tools, playful storytelling and theoretical frameworks for childhood meaning-making. Our multi-disciplinary team (two architects, an education specialist, a computer scientist, a robotics engineer, and six interaction designers) developed a common framework for designing an interactive learning tool that would engage children in playful activity while enhancing their learning and storytelling experience. After pondering and debating the different aspects of the tool, including its physicality and its user experience, as well as considering digital media and learning theory, the design team developed alternative prototypes, which converged during a follow-up design phase as CyberPLAYce (Fig. 1). The following scenario, developed with the education specialist leading the effort, envisions how CyberPLAYce operates in the classroom setting:

One day, in a classroom of 8 year olds, Mr. Smith asks the students to think of the routine tasks the students perform each morning at home. Then he tells his story of “Jane”: The sun rises just before Jane’s alarm goes off. When Jane hears the sound of the alarm, she pushes a button to turn it off. She turns on her bedroom light and her room becomes yellow. Jane walks to the bathroom to take a shower, but first she tests the water to make sure it isn’t too hot….

When children break down a story or problem into smaller and more manageable segments, they better understand, interpret and construct knowledge (i.e., they think computationally) [17]. Jane’s story was broken down in this way (Table 1), and each story segment was defined by concepts and actions.
Table 1.

The break-down of Jane’s story into segments, as a vehicle to thinking algorithmically and computationally

CyberPLAYce icon and action cards (Fig. 3) were designed to help children create pattern sequences and map-out story ideas of their own.

In a ten week period, the first-functioning CyberPLAYce prototype was designed and built by our design-research team employing the open – source Arduino [4] platform, and containing magnetic panels and modules of electronic components, such as push buttons, LEDs, temperature sensors, light sensors and LCDs (Fig. 4). Etched into the electronic modules were the images of the icon cards, providing real-time feedback when children plug the modules into the panels, and assemble the magnetic panels into spatial constructions.

As an early test of CyberPLAYce’s capacity, the segments from the CyberPLAYce scenario were matched to various input-output activities (Table 1) – a linkage of cards, modules and ideas that suggests how CyberPLAYce might provide children the means to think, understand, learn and share through a multi-modal, interactive and tangible experience. The different physical, digital and spatial dimensions of the CyberPLAYce tool offer children a variety of story-making elements to choose from which and create their own story of interest.

The CyberPLAYce study posits three research questions for this mixed-technology learning tool: (1) Can children comfortably use the technology during storytelling?; (2) To what extent is a modular, multi-sensor design-kit usable?; and (3) How does CyberPLAYce support children’s storytelling experience and enhance their personal and computational expression? To test the CyberPLAYce experience, an initial evaluation of the CyberPLAYce prototype was conducted in our lab prior to the empirical study assuring that the children (two 4th grade students) can comfortably use the technology. This initial study informed a few minor fixes and refinements including both visual and technical enhancement.

The empirical study was conducted over three days. Each day, one pair of children, ages 8–10, participated in a 2.5-h evaluative session. Relative to the research questions posed, the sessions were designed to elicit data on the system’s usability (Questions 1 and 2), and efficacy (Question 3). The empirical study reported here follows from the recorded observations and feedback received from children and the research team in the evaluation of our full-functioning CyberPLAYce, carried out with 8 and 10 year old children, and mostly focuses on the usability studies (Questions 1 and 2).

To collect data on whether children could comfortably use CyberPLAYce during interactive storytelling, the research team was guided by established protocols for evaluating interactive technology for children [18]. Children completed two main tasks, Tasks 1 and 2, during each session. In Task-1, children listened to a given story (Jane’s story), and then were asked to retell the story through the icon and action cards (Fig. 3). Children began by: 1. matching the story segments to the action cards, and 2. using the icon cards, finding different input-outputs that define each action. Subsequently, the participating children were asked to retell the story by plugging-in the associated CyberPLAYce modules into the panels according to the order of the icon cards that they had previously organized. In Task-2, the children were asked to choose at least six action cards out of ten provided them, and to match these action cards with the relevant icon cards. The action cards provided the children pictured different phenomena (e.g., a jungle, a GPS device, a car, a lion, and a thunderstorm). Children then wrote on paper their own stories following from the prompts pictured on their selected action cards. Lastly, each group presented their composed story through a creative combination of the CyberPLAYce cards and modules. Children completed Tasks 1 and 2 collaboratively while sharing ideas and communicating through the tangible tool. During each session, the research team observed the storytelling activity, and made notes on how participants engaged with the cards, module and panel interfaces, and reacted to the tool overall. Immediately after the storytelling and story creation activities, the research team asked the children for feedback about their experience of telling stories through CyberPLAYce. The sessions were videotaped (see http://youtu.be/uZpGh-_KXQY) and the discourse transcribed.

Furthermore, at the end of the session, each child completed a facilitated questionnaire (employing Smileyometer [18] on a 5-point Likert scale) that evaluated CyberPLAYce on measures of usability, aesthetic design and storytelling engagement.

Figure 5 illustrates samples of questions included in the questionnaire. To offset any potential limitations of the “Smileyometer” instrument, such as inclusion of leading or confusing questions, the results of the questionnaire were confirmed against documented observations of usability errors exhibited by the children.

The results of the questionnaire (Table 2) indicate that most of the children enjoyed the process of creation, discovery and storytelling, and found the tangible tool fun and engaging. High rating on “storytelling motivation” suggests that the children surveyed would use CyberPLAYce again to create and tell other stories, and this tangible may have helped them understand story concepts through a playful experience. Meanwhile, children reported that they thought it would be difficult to explain to a friend how CyberPLAYce works – something to consider.
Table 2.

Questionnaire results of the empirical study

Our next experiment will focus on advancing the spatial dimension of CyberPLAYce and answering the third CyberPLAYce research question: How does CyberPLAYce support children’s storytelling experience and enhance their personal and computational expression? A new CyberPLAYce prototype was designed and built following the feedback received from the children, educators and our research team participated in the empirical study reported here.

The next empirical study with children is currently being conducted in S. Carolina middle schools. The most recent prototype is being used for the new empirical study which contains triangular-shaped panels (Fig. 6) employing friction joints on the edges of the panels providing temporary connections between the panels. The current study seeks to answer how spatial and computational thinking [17] can help students grasp and construct knowledge. Results of this study, combined with the study reported here, will be presented at the HCI International Conference.

For the larger HCI International community, CyberPLAYce is a case of research through design focused on cyber-physical learning tools, and tangibles extending into the spatial dimension. As computing becomes ever-more ubiquitous in our everyday lives, it will inevitably occupy the physical spaces we live in, and increasingly converges with it to construct a tangible environment – a next frontier for HCII.