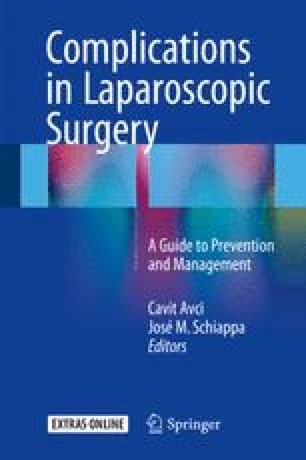 Despite all “calls for attention” and many papers published alerting to the importance and high rates of iatrogenic lesions of the biliary tract, these lesions continue to happen, with unreasonable frequency.

This chapter approaches the incidences reported and the possible causes for it and presents “tips” on how to have it minimised. These “tips” go to present some technical details that may be of importance for all those who perform, regularly this kind of surgery. As the other chapters, some video clips showing examples of the problems are attached.

Portal Hypertension Biliary Tract Cystic Duct Acute Cholecystitis Bile Duct Injury
These keywords were added by machine and not by the authors. This process is experimental and the keywords may be updated as the learning algorithm improves.

334927_1_En_2_MOESM1_ESM.mp4 (58.3 mb)
Video 2.1 Demonstration of the movement done with the “flag” manoeuvre and the way it allows to obtain the Critical View of Safety (MP4 11419 kb)
334927_1_En_2_MOESM2_ESM.mp4 (60.6 mb)
Video 2.2 “Classical” iatrogenic lesion of the CBD. Improper view, without having obtained CVS. The cystic duct is short and narrow and too much traction gives raise to “camel hump” of the CBD (at 01:58). Intraoperative cholangiography does not help avoiding the lesion; it only shows that it has been produced (MP4 59698 kb)
334927_1_En_2_MOESM3_ESM.mp4 (11.2 mb)
Video 2.3 An “almost” correct view of CVS has been obtained but it is not enough; it lacks freeing of the lower third of the gallbladder from its bed. There is a “camel hump” and the surgeon cuts a tubular structure without proper identification or control. The hepatic artery is well visualised, pulsating. Cystic duct arises from the right hepatic duct (MP4 62096 kb)
334927_1_En_2_MOESM4_ESM.mp4 (38.2 mb)
Video 2.4 Many wrong technical steps in this cholecystectomy: gallbladder wrongly grasped and wrongly positioned. Lack of vision at the infundibulum. Aggressive and not appropriate forceps. Cutting structures without proper dissection, without proper identification and following cutting with aggressive cautery (MP4 39121 kb)
334927_1_En_2_MOESM5_ESM.mp4 (6.8 mb)
Video 2.5 The use of electrosurgery, specially using the hook, can be extremely dangerous as, sometimes, there is a lack of control of the instrument. In this video, the hook, while dissecting the hilum of the gallbladder, “jumps” without being controlled, to the anterior surface of the duodenum. It was still active and burned the duodenum. The surgeon saw it but thought it would be a minimal problem. First day post-op, there was a duodenal perforation (MP4 7012 kb)
334927_1_En_2_MOESM6_ESM.mp4 (12.8 mb)
Video 2.6 Acute situations can be complex and inflammation makes strong alterations in local anatomy. Acute cholecystitis can be accompanied by local abscesses (MP4 13069 kb)