Some Aspects of the Formation of the Solar System 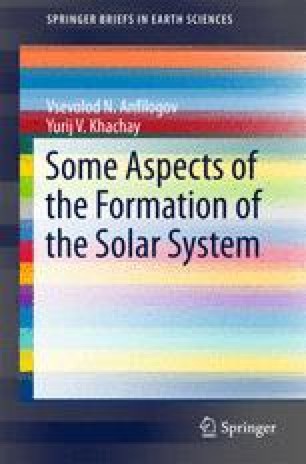 Formation of the Earth’s Core

This chapter describes the physical model that is used for numerical solution of the problem of temperature distribution in the forming core of the growing Earth. It defines the composition of the Earth’s core, on which depends, in particular, the changes during the process of accumulation and the melting temperature distribution from the pressure. There is discussion of the conditions that describe the energy balance on the surface of the growing planet. The obtained variants of the numerical temperature distribution in dependence on the values of the model parameters are presented. All variants of the solution are described for the moment when the core ceases to grow, the formation of the inner solid core and melted outer core. It is shown that different conditions ensure either the solid state or the melted state of the layer that forms at the bottom of the forming mantle.

4.1 Mechanism of the Earth’s Core Formation and Its Possible Composition

According to geophysical data, the modern distribution of the density of the Earth’s core requires that, besides iron, it must also include a considerable amount of light components. In our variant, in the initial stage of the process of heterogenic accumulation, core growth occurred from the materials which arrived on the surface of the growing Earth from the supply zone at low pressure. Therefore in the core composition there can be only those components that were by that time present in the supply zone and that were dissolved in substantial amounts in the melted iron by low pressure. The main light component in the core is FeO, according to the assumption of [2]. In the initial stage, when the initial pre-planetary Earth’s bodies are formed, the composition of the iron–nickel material corresponds to the composition of iron meteorites, in which the composition of FeO is negligibly low. Troilite, which is considered as a possible light component of the core [2] and which exists in iron meteorites, formed in them later than iron, and it is not in an equilibrium state with the iron [3]. Therefore, the entry of considerable amounts of sulphur into the Earth’s core during the heterogeneous accumulation is problematical.

One of the problems that arise from discussion of the question about FeO entering into the core composition is the problem of the possibility of achieving in the proto-planetary cloud the value of partial oxygen pressure necessary for forming FeO. A priori that value is not known. In the literature there are many variants for obtaining the required value PO2, including the participation of water [2]. Actually, that problem is solved by nature itself. The existence in olivine pallasites up to 30 % of the fayalite molecule [4] is evidence that the iron oxide condensed from the gaseous phase in the form of olivine together with the metallic iron. From melting of the olivine in the melt, free iron oxide is formed, which is not linked with SiO2. It occurs as a result of partial decay of the fayalite component [5]:
$$ {\text{Fe}}_{ 2} {\text{SiO}}_{ 4} = {\text{ FeSiO}}_{ 3} + {\text{ FeO}} $$
The relation between the content of the free iron oxide FeO and the melt composition in the MgO-FeO-SiO2 system is shown in Fig. 4.2 [5]. If the olivine melt is in an equilibrium state with the melted iron, the part of free FeO will dissolve in the iron and the equilibrium of that reaction will shift to the right. The conditions of FeO dissolving in the melted iron were investigated in detail by Othani et al. [6]. According to their estimation, for the core density to correspond with the geophysical data, the content of the iron oxide in the core has to reach a value of 40 mol% FeO [6]. By the melting temperature of olivine and by low pressure, the solubility of FeO in the melt of Fe does not exceed 4.0 mol%, but that value sharply increases as the temperature increases [6]. The high solubility of iron oxide is achieved by the increase of pressure [6]. This is because the molecular volume of the FeO dissolved in the melted Fe is 3.8 cm3 less than in the melt of FeO [6]. Nevertheless, the possibility of dissolving 40 mol% FeO in the melted core is far from obvious. The problem lies in the fact that the main olivine mass, from which the iron oxide FeO enters into the core, is concentrated in the surface layer of initial pre-planetary bodies and as a result of these conditions it is impossible to provide the uniform distribution of FeO in the middle iron–nickel envelopes. It can be distinguished only in the formation of secondary pre-planetary bodies, when, as a result of collisions, mixing of the material of the initial pre-planetary bodies occurs. With the radius of the secondary pre-planetary bodies reaching more than 200 km, the necessary solubility of FeO in the core is achieved due to high internal pressure.
Additional information about the possible composition of the Earth’s core can be obtained from the density distribution in the present core. From the curve of the core’s radial distribution density (Fig. 4.3), three intervals can be distinguished.

4.2 The Temperature Regime During the Process of the Earth’s Core Growing

Further evolution of the growing Earth depends on the temperature that was reached in the core. We can estimate it by the following. The temperature distribution in the body of the increasing radius is obtained from the numerical solution of the boundary value problem for the system of heat equation with a convective term, the balance equation of impulse, mass, gravitation potential, and the equation of the Stefan problem for phases of boundary shifting [1]. In this stage the solution can be derived using the 1-D model taking account of the possibility of melting appearing without explicit location of the crystallization of the front boundary, and taking parametrical account of convective heat transfer in the melting zone [7, 8]. On the surface of the growing body we assign the conditions that provide the balance between the incoming part of potential energy of gravitational bodies interaction, heat expenditure for heating of the falling matter, and thermal energy radiating to space, taking account of the transparency of outer space. The separation of the proto-planetary material into the metallic and silicate components that occurred in the stage of core growth must be taken into account in the mathematical modelling of the core’s thermal regime. The concentration of short-living isotopes decreases at the final stage of core formation and the energy contribution from their decay becomes minor.

Mathematical modelling of the thermal evolution of the growing planet is based on the above scheme of the process. For the velocity of the growth of the planet’s pre-planetary body, from the model of Safronov in variant [9], the following equation is used:
$$ \frac{\partial m}{\partial t} = 2(1 + 2\theta )r^{2} \omega (1 - \frac{m}{M})\sigma $$
(4.1)
where: ω—angular velocity of the orbital motion, σ—surface density of the matter in the “supply” area of the planet, M—modern mass of the planet, r—the radius of the growing pre-planetary body, q—statistical parameter which takes into account the distribution of particle masses and velocities in the supply zone. The temperature distribution in the body, whose radius is increasing, was discovered from numerical solution of the boundary problem for the heat equation, with consideration of the possibility of melt occurring, but without taking into account the crystallization front position and parametric counting of the convective heat transport in the melt [10, 11]:
$$ c_{ef} \rho \frac{\partial T}{\partial t} = \nabla (\lambda_{ef} \nabla T) + Q $$
(4.2)
where: \( c_{ef} ,\lambda_{ef} \)—the effective values of the heat capacity and thermal conductivity, T—temperature at the desired point in time t, Q—volumetric capacity of internal heat sources. On the surface of a growing body of given conditions, to ensure the balance between the incoming part of the potential energy of the gravitational interaction of bodies, loss of heat to heating of the sediment material, and radiated heat into space with the transparency of the environment:
$$ k\rho \frac{GM}{r}\frac{dr}{dt} = \varepsilon \sigma [T^{4} - T_{1}^{4} ] + \rho \,c_{P} [T - T_{1} ]\frac{dr}{dt} $$
(4.3)
where: ρ—density of the matter, G—gravitational constant, M—mass of the growing planet, r—its radius. T and T 1 —correspondingly, the temperature of the body boundary and outer space, ε—coefficient of medium transparency, c p —specific heat capacity, k—the part of the potential energy transformed into heat. The velocity of change of the radius according to the chosen density model is defined from (4.1). At present, the more perfect expressions are suggested for the Earth’s accumulation time [12]. They provide a qualitative similarity with (4.1) and give the best correspondence with the given data, but the calculation of ∆r leads to additional technical complexity, which is why we use (4.1) at each step. The problem is solved by use of the constant step for the space grid ∆r = 100 m, and not a uniform step for the time grid, which is defined from (4.1) for given ∆r. We used the implicit, conservative, stable scheme, with the second approximation order for the space coordinate and with the first order for the time coordinate. For the successive time moments, at which the planet radius grows in the step ∆r, we define the distributions of temperature, lithostatic pressure, adiabatic temperature, melting temperature, viscosity, and effective thermal conductivity, linked with the solid state value through the Nusselt number. It is assumed that in the area with a developed convection there are realized not very critical flows, for which Nu ≤ 2. That corresponds to the variant in which the temperature distributions in convective areas give their upper estimation.
Some possible variants of the temperature distribution in the core, when the Earth’s size is equal to 3500 km, are shown in Fig. 4.4.

The main difference between these variants and the variants given before consists in the existence of the minimum values of T corresponding to 400–500 km. By that time, the value of energy being released decreases significantly with 26Al decay. At the same time, as the mass of the proto-planet increases, the amount of the kinetic energy of falling accumulated bodies and particles also increases. In the final stage of the core accumulation, account is taken of the decrease of the part of the energy transformed into thermal energy, which is due to the part of the solid silicate component of the collision bodies, which leads to the significant decrease in temperature of the forming layers.

The possible variants of the temperature distribution up to the moment when the planet size reaches 6300 km are shown in Fig. 4.5.

As seen from the results presented in Fig. 4.1, the temperature distribution is determined by the heat output caused by the decay of short-living radioactive isotopes only in the initial stage, and up to the moment when the radius reaches 300 km. The further energy balance depends on the part of the potential gravitation energy that results from collisions of the accumulated bodies, on the heat, and on the other part, which is lost by radiation. According to the mechanism described above in the presented variants, the differentiation is explicitly on account of the fact that, in the growing stage of the greater part of the iron core, the collisions that occur are practically inelastic and most of the potential energy is transformed into thermal energy. In the final stage of the core’s growth, the pre-planetary body can already retain the outer brittle envelope of the collision bodies. The impact becomes more elastic, which is explained by the decrease in the part of the potential energy used for heating. The presented results show that, by the end of core formation, the temperature distribution in the variants obtained in accordance with the experimental relation of the iron’s melting temperature, the Fe–FeO mixture, and the pressure [14], support the melting state of the outer core and the solid state of the inner core.