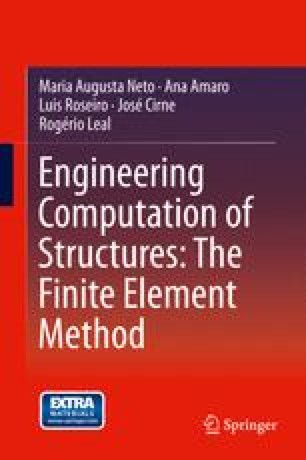 A beam is a structural member whose geometry is very similar to the geometry of a bar. It is also geometrically a bar of an arbitrary cross-section, by bar it is meant that one of the dimensions is considerably larger than the other two, whose primary function is to support transverse loading. The main difference between the beam and the truss is the type of load that they support. In fact, beams are the most common type of structural component, especially in civil and mechanical engineering. A beam resists to transverse loads mainly through a bending action and, the bending is responsible for compressive longitudinal stresses in one side of the beam and tensile stress on the other beam side. These two regions are separated by the neutral axis in which the stress is zero. The combination of tensile and compressive stresses produces an internal bending moment. Finite element equations for beam-like structures are developed in this chapter.

Shape Function Beam Element Local Coordinate System Global Coordinate System Element Matrice
These keywords were added by machine and not by the authors. This process is experimental and the keywords may be updated as the learning algorithm improves.
This is a preview of subscription content, log in to check access.