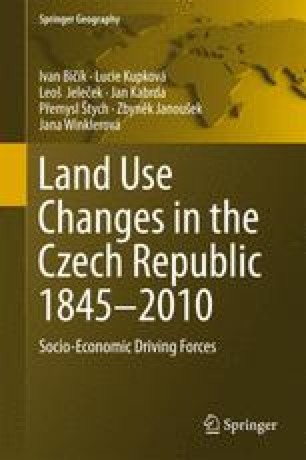 Land use changes between mid-nineteenth century and present in four selected model areas are outlined. The analyses are based on research by individual plots and bring detailed results that cannot be obtained using conventional statistical methods. The model areas were chosen so that they would represent different landscape types in different parts of Czechia. The first one, Abertamy-Hřebečná, is a remote village located in the border mountains. The place has poor natural conditions and has been much influenced by the expulsion of German speaking population after World War II. In other words, human activities decreased significantly over the past 160 years; shift towards permanent grassland and forests was typical. Second, Kutlíře is found in the fertile Elbe Plain in Central Bohemia and typifies the long tradition of farming. Unlike many other regions, farming remains crucial also nowadays, with emphasis on grain and other crops that require favourable soils and climate. Third, Čestlice is located near Prague adjacent to the main freeway, also in a quite fertile area. Due to the proximity of the capital city, however, the place has been recently much affected by suburbanization. In land use terms the result was a significant expansion of built-up and remaining areas. The last model area, Břekova Lhota, represents the so-called “inner periphery”, placed outside the major economic zones and part of the Less Favoured Areas (LFA). The traditional reliance on subsistence agriculture has been replaced over the past 150 years by a mix of agriculture and leisure activities (second homes). Changing patterns of land use are shown in tables for each of the model areas that include eight basic land use classes. Importance of aerial images as an evidence of land use/cover change is documented using an example of the mountainous cadastre Horní Rokytnice nad Jizerou.