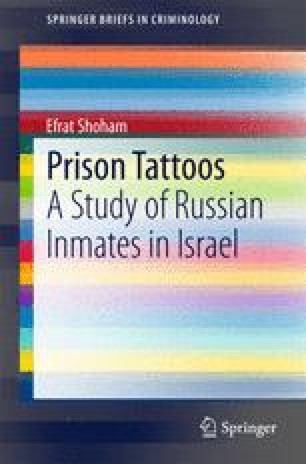 Chapter
Part of the SpringerBriefs in Criminology book series (BRIEFSCRIMINOL)

The last decade has seen a dramatic increase in the number of people adorning their bodies with a variety of colorful tattoos . However, we can see several significant differences between the highly common fashion of tattoos among members of Western society and the language of tattoos utilized by the criminal world in general and the cultural world of former Soviet criminals in particular. Unlike a person’s need to define himself as different through reinforcing his differentiation and individuality, which is one of the main reason for choosing tattooing, in criminal culture the role of tattoos is to actually reinforce one’s place within the criminal collective and declare one’s solidarity and joint fate, the sense of belonging and commitment to the group in which the criminal acts. The language of criminal tattoos is meant to represent a criminal’s identity and to tell his life story. Heroic as it may be, the story behind criminal tattoos includes an ideological subtext that protests against the existing social order and presents an alternative based on the criminal codex. At the same time, the dynamic reality of tattoos in the free West allows the use of any kind of symbol, organized or not, based on an individual’s personal preferences and free choice.

Life Story Criminal Group Cultural World Holocaust Survivor Dynamic Reality
These keywords were added by machine and not by the authors. This process is experimental and the keywords may be updated as the learning algorithm improves.
This is a preview of subscription content, log in to check access.