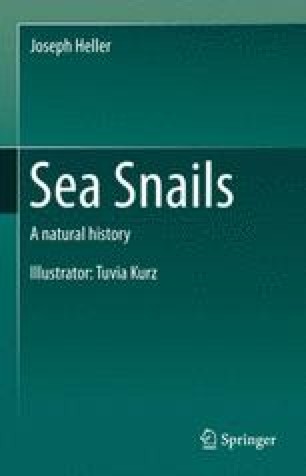 The radula with its bristle-like teeth is primitive, but reproduction is advanced. Fertilisation is internal, eggs often develop inside a special capsule and hatching veligers feed on plankton until metamorphosis. Typical shells are thick, semi-globular with several whorls; the inner partitions dissolve during development, forming one large shell cavity; in others the shell is thin, and in some it is lost and the snail slug-like. Shell colours are highly variable with hues of purple, red, yellow, white, brown and black in complex patterns.

Nerites flourish in intertidal and subtidal rocky shores but some inhabit submarine caves, interstices among coral rubble, deep seeps or sulphide-rich environments. Some live, mate and lay eggs in rivers; the hatching veligers are swept to the ocean where they feed, grow and disperse; when happening upon a river mouth they metamorphose, migrate upstream and mature. This life cycle (‘amphidromy’) is common in tropical islands; the upstream migration may occur in large aggregations. Some nerites spend all their lives in freshwater; here one embryo inside each capsule develops faster, canibalises its siblings, develops into a miniature adult and hatches. Others have become terrestrial by direct embryonic development inside albumen-rich eggs. Nerites are on the evolutionary road to advanced snails.