Media Art and the Urban Environment 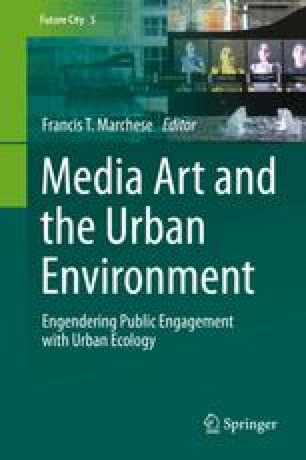 “Solar Cycle 24” is a public art installation with a focus on placemaking and digital aesthetics in the urban environment. Presented in a “nonart” venue, the temporary project coincided with the expected peak of an actively occurring astronomical event, solar cycle #24. This astronomical event is a recurring phenomenon of solar storms and the resulting spectacular activity of aurora borealis, or northern lights, which ebb and flow on 11-year cycles with high visibility around the North and South Poles. The installation “Solar Cycle 24” was an investigation of digital animation as public art with a focus on placemaking in the urban environment. Coproduced by the New York-based arts organization chashama, “Solar Cycle 24” was publicly visible between dusk and dawn between February 23 and March 10, 2013.

Urban Environment Digital Medium Solar Storm Fast Food Chain Astronomical Event
These keywords were added by machine and not by the authors. This process is experimental and the keywords may be updated as the learning algorithm improves.