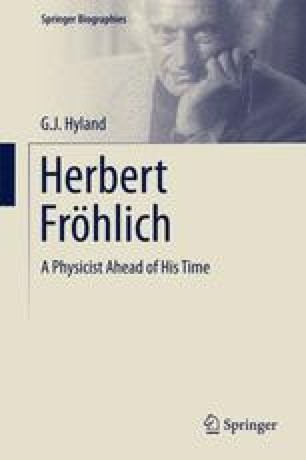 Once in Bristol, Fröhlich finished his book on the electron theory of metals (Elekronentheorie der Metalle [F(i)]) in September 1936, having signed the contract already in 1934. It was published the following month by Springer, who had by then moved to Vienna, as Volume XVIII of their Monograph Series ‘Structure & Properties of Matter’: the Vienna Editor was H. Mark (vide Chap.  3). Although unable to arrange any royalties, Springer did pay him a generous advance amounting to a few thousand marks.

Conduction Electron External Electric Field Lattice Vibration Original Theory Dielectric Breakdown
These keywords were added by machine and not by the authors. This process is experimental and the keywords may be updated as the learning algorithm improves. 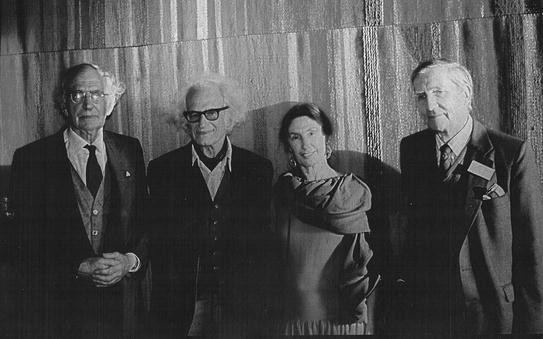 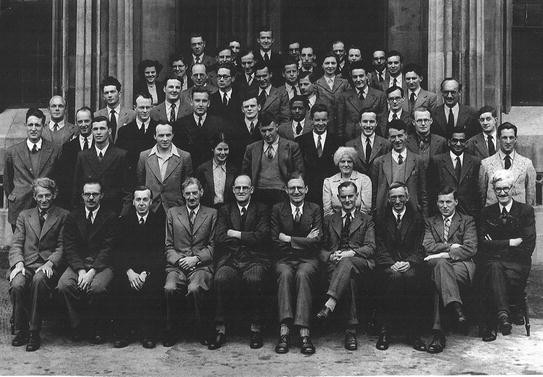 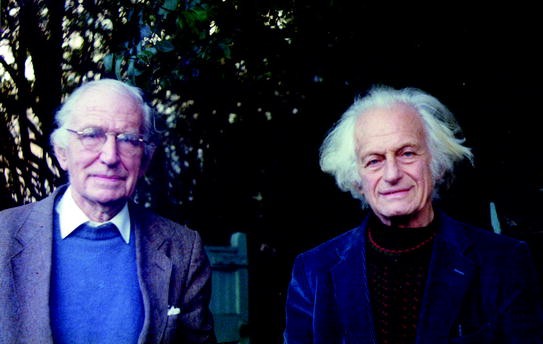 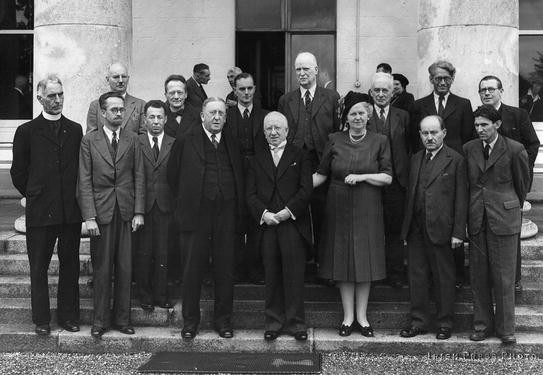 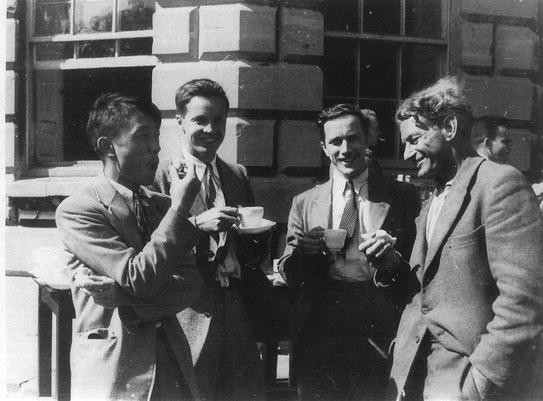 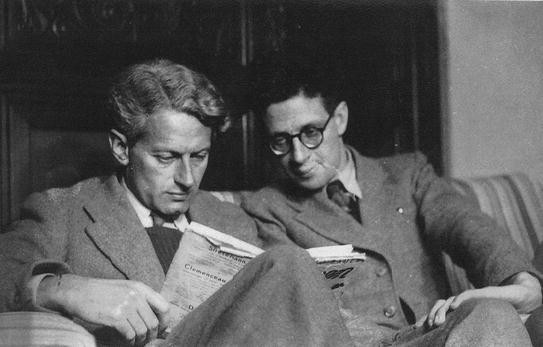 Reproduced with the permission of CARA

(The curtain rises, revealing a very dimly lit stage, with no particular shapes or objects clearly discernable, but with the entire space in a state of agitation—not unlike the air above a glowing brazier. Streaks of brightness, like flying sparks, appear and disappear, predominantly in pairs, but occasionally and with increasing frequency, singly.)

As each actor or group of actors speaks they come into sharper focus.

‘…..in cosmic rays… with unit charge……. about 200 times more massive than an electron

A group of theorists

Hey! Wasn’t there a paper by a Japanese accounting for nuclear forces—two years ago—with a charged boson? Let’s see—Ah yes, Yukawa. Would you believe it! He wants a mass of about 200! We’ll have to study this

A smaller group among the theorists

…….and Pauli and Weisskopf have that ‘anti-Dirac’ paper. They show that a charged field of spinless bosons would behave very much like the Dirac field. That must be what Yukawa is doing!

A distant voice (with Japanese accent)

Bhabha (From the other side of the stage)

I’ll try to do the same

I’ve found an entirely new set of equations for the electron. I’m sure they are consistent

Let’s get going. We must modify Yukawa’s theory to get spin-dependent nuclear forces

But Proca’s equations are just right for Yukawa’s boson modified to spin 1. I must apply Pauli-Weisskopf to them!

Voices of many theorists

But they are quite wrong! Electrons have spin ½, not 1

Hullo, Pauli asked me to get in touch—what are you up to?

I’m busy getting spin into the Yukawa’s forces

Fröhlich and I are doing the same. We’ve put a spin interaction into the Pauli-Weisskopf scalar theory

Kemmer (Pauli’s approving voice is heard again overlaid by what seem to be infantile gurgles and chuckles that sound strangely Chinese.)

You are breaking an absolutely inviolable law; your way doesn’t conserve parity!

I think my way is better. Ever heard of the Proca equations?

Let’s collaborate. We’ll have to learn about Proca

Here is our paper. We now have the full vector boson theory. It looks like electrodynamics. We’ve added the ‘vector potential’ bits now

Here is our paper, with a vector boson obeying Proca’s equations

Here is my paper with a full vector boson theory

We are all saying just the same things! We will start predicting things for Anderson’s particle (which he calls ‘mesotron’); we’ve fitted things to give the right neutron/proton force. We all agree that a neutral mesotron is needed for the full nucleon-nucleon force scheme

It would have made our paper too long. That’s why you are publishing that stuff on your own38. That other paper of yours was useful too. You’ve shown that vector bosons are O.K.; scalar, Pauli-Weisskopf ones aren’t. Nor are the pseudo-scalar and pseudo-vector cases that you dragged in

The group of 7, with Kobayashi

The more we compare our predictions with mesotron behaviour, the worse the agreement looks! Perhaps after all our theory is too shaky. We can’t get beyond first order perturbation, the coupling is too strong for that and the higher order infinities are horrendous

Even so, we did try to get something sensible on magnetic moments, but nobody believes us

Stueckelberg (equally faint) (Nobody on the stage hears these last two calls.)

I’ve nearly got that!

[THERE IS AN INTERVAL FOR REFRESHMENTS, WORLD WAR II, etc.]

(Some years later; the scene is the same as before but it has become a good deal brighter. The ‘atmospheric phenomena’ continue but we are getting more varied flying sparks appearing and disappearing. The figure of Fröhlich is seen to move slowly to the back of the stage, where throughout the act he seems to be building beautiful structures which begin to look much more solid than anything that had loomed up previously. Other figures join Fröhlich. Occasionally he stops to look back at the action in front.)

Powell (flanked by Lattes and Occhialini)

All your fine ideas had nothing to do with the mesotron—which we call muon, but here—catch!

There’s my new pion—that ought to suit you!

And here’s a neutral pion for you too! (They toss it over)

That’s good, it will fit the facts!

Tomonaga, Schwinger, Feynman and Dyson together

We know how to make good sense of field theories—some of them. Quantum electrodynamics makes perfect sense now!

Then tell us how to deal with vector bosons! That’s what pions are—isn’t it?

It doesn’t fit experiments either!

That was a stupid, careless thing you did long ago; why didn’t you link your isospin ideas with the other stuff? With isospin you get an additional factor (-3) for the deuteron ground state; the vector boson calculations by all of you were wrong!

But the pseudoscalar case…

The one we thought least likely……

Yes, that. It seems to fit best!

And I can renormalise that one!

….and the interaction that fits is not the renormalisable one…

So what is left of our theories? Not the vector boson, it seems

But the isospin idea is good

And I’m glad I thought of the pseudoscalar

Young theorists (A complex plane looms; many young theorists climb on to it.) As the curtain falls, the light dims somewhat, spark flying increases dramatically).

But with the strong coupling have we any way to improve our theories? It’ll be a hard job. We’ll look for new methods

(Many years later. Scene as before, with many new big strong buildings in the background. Fröhlich is still there in a large company. In the foreground the spark flying is not quite as intense but new types of sparks in the three primary colours start to grow prominent. Previous actors look old.)

How silly you were! It was all a red herring. Your baryons and mesons aren’t elementary!

Look at our quarks and gluons!

Does that mean you have field theories that work?

We use vector bosons!

What! They were quite dead!

Ours are alive and kicking. Can you spare some millions to help us find more of them?

They’re rather different from yours.

Klein (faint voice from the past)

What I nearly had long ago!!

And what I got pipped at the post with and never published!

We don’t put in masses. We’ve gone non-linear. Isospin and symmetries like it are the key

I can, for these gauge theories!

But oh, so complicated!

Fragment of an Unpublished Manuscript with Heitler on Chain Reactions (c.1939/40)

Reproduced with the permission of the Department of Physics, Bristol

The numbers in round brackets at the end of each caption correspond to the section of the text to which the photographs refer.

Unless stated otherwise, all photographs are from private collections.