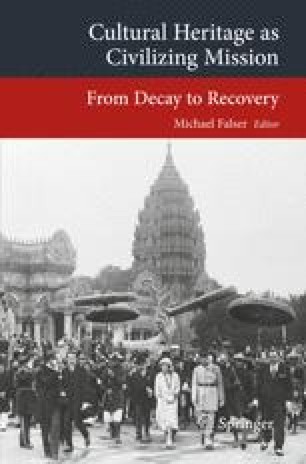 The self-legitimation of political regimes in modern history was and often still is attempted through a twofold strategy: (a) a normative assessment of the ruled country’s past and present, and (b) the enactment of a concrete committed action programme to guide the nation towards a better future. The interest in this dynamic of a normative (intro-)vision on the one hand, and—as a practical consequence—of an applied, action-oriented mission on the other, forms the basis of this volume’s thematic inquiry. Although this critical assessment of the past and present may encompass a wide variety of aspects (social, financial, moral, intellectual, etc.), our focus here is on the specific field of materialized culture, and in particular on the complex of architectural manifestations that crystallizes over time through a multiform process into a (supposedly) “representative,” (i.e. trans-generational and collective) cultural canon of the nation known as cultural heritage.

Cultural Heritage World Heritage Khmer Rouge Hague Convention Historic Monument
These keywords were added by machine and not by the authors. This process is experimental and the keywords may be updated as the learning algorithm improves.

The era of decadence […] ended with the arrival of the French in Indochina. Civilization does not exist anymore in this privileged country where it once strongly flourished, but the soil preserved its incomparable fertility. Since we put our flag into this region, it seems that [this civilization] begins to live and breathe again. […] is it not up to us to revive the marvelous past of this people, to reconstitute the admirable oeuvres which their genius has created; in a word: to enrich the history of art and the annals of humanity with a new page?

All English translations in this introduction are mine.

Angkor must be saved! This challenge, in which UNESCO proposes to stand beside the people of Cambodia, extends far beyond a mere restoration of relics of the past. For the saving of Angkor will allow an entire people to regain its pride, its will to live and a renewed vigor with which to rebuilt its country. I therefore appeal to the international community as a whole to put the stamp of universal solidarity on the rebirth of Angkor.

UNESCO’s director general, Federico Mayor’s Appeal for the protection, preservation, restoration and presentation of the site of Angkor, launched on November 30, 1991 in front of the Angkor Wat temple