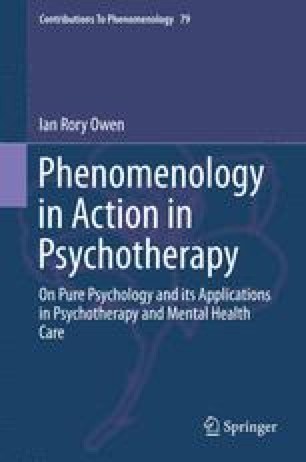 Phenomenology in Action in Psychotherapy pp 287-310 | Cite as

On Being Unable to Control Variables in Intersubjectivity

Given that the proofs of the exact essences like mathematics are the achievements of the natural sciences and technology, it is to be seen what the empirical impact will be from inexact morphological essences. This chapter compares psychometrics and the numericisation of meaning in natural psychological science with the pure psychological approach. The argument below is that empirical methods need to be suitable for the form of being that is researched. For instance, randomised control trial (RCT) methodology is suitable for testing pharmaceutical products; but it is also used for testing the effectiveness of different brands of therapy. RCT methodology like any type of empiricism makes a series of ontological assumptions which in testing pharmaceuticals are acceptable. But if it is agreed that variables in intersubjective processes like therapy are incapable of being investigated in the same way, then findings from that method are unacceptable. The main problem is the difference between treating the client-therapist relationship as if it were a pharmaceutical product when it is a meaningful, evolving interaction between two or more people. The RCT methodology is compared to another form of psychological testing of the efficacy of therapy practice. The aim of the chapter is clarifying the differences between the naturalistic attitude and the pure psychological one. Naturalistically, if the focus is on serotonin in the brain then it would be necessary to medicate because the assumptions is that serotonin helps decrease the strength of all emotions and so helps the brain alters its physiology through naturalistic causes. Empirical psychology is noted as permitting the Popperian falsificationist style of hypothesis-driven methods, observations and experiments. Testing falsifiable claims can become sharper when testing what really counts. Given that therapy techniques are ways of understanding and changing meaning, the pure psychological view considers brands of therapy and mental health care as merely alternate means to the same end. In a close attention to detail the natural psychological approach to experimental design is to make two groups of participants who are judged to be sufficiently similar. Psychometric testing is applied to quantify some psychological aspect of both groups and to measure the impact of a treatment in therapy research (or some other intervention that is given to one group but not the other). The assumptions made are that there are other unmeasured and uncontrolled variables that will affect the participants and show up in the psychometric scores obtained. However, with a large sample size it is assumed that such tendencies will be averaged out to show the impact of the intervention and its absence on two equivalent groups of participants. The acceptability of this assumption is challenged below. The chapter ends with noting the consequences for an empirical therapy and mental health care based on formulation.

Cite this chapter as:
Owen I. (2015) On Being Unable to Control Variables in Intersubjectivity. In: Phenomenology in Action in Psychotherapy. Contributions To Phenomenology (In Cooperation with The Center for Advanced Research in Phenomenology), vol 79. Springer, Cham. https://doi.org/10.1007/978-3-319-13605-9_15