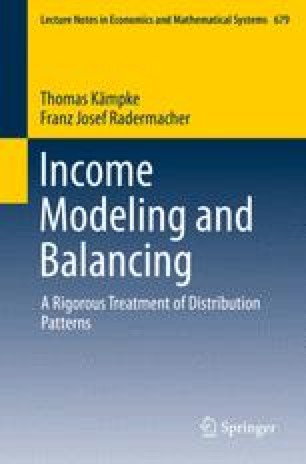 Societal Utility and the Atkinson Theorem

The Atkinson theorem is formulated in a rigorous way. Societal utility of an income distribution is to be maximized for an additive utility function such that the mean income is preserved. Then, for finite distributions with rational probabilities, (1) majorization, (2) finite sequences of Pigou-Dalton transfers, (3) the Lorenz order and (4) the convex stochastic order are equivalent. When distributions are no longer finite, majorization and finite sequences of Pigou-Dalton transfers refer to approximate distributions. With these concepts, the Atkinson theorem can be shown to also hold for general distributions.

Utility Function Income Distribution General Distribution Lorenz Curve Inequality Measure
These keywords were added by machine and not by the authors. This process is experimental and the keywords may be updated as the learning algorithm improves.
This is a preview of subscription content, log in to check access.