Introduction to the Analytic Hierarchy Process 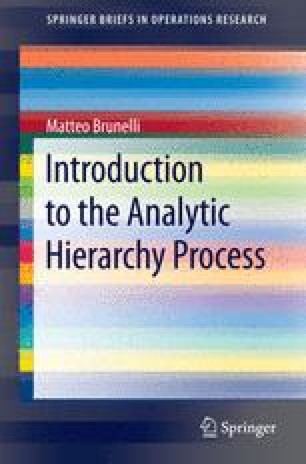 Introduction to the Analytic Hierarchy Process pp 65-70 | Cite as

As reported by Saaty and Sodenkamp [112], in 2008 Saaty was awarded by the INFORMS for the inception and development of the AHP. Part of the motivation for the award was the following:

The AHP has revolutionized how we resolve complex decision problems... theAHP has been applied worldwide to help decision makers in every conceivable decision context across both the public and private sectors, with literally thousands of reported applications.

Moreover, from a survey by Wallenius et al. [132] it seems that the AHP has been by far the most studied and appliedMCDMmethod, at least judging by the number of publications. The reader should have noticed that only basic mathematical and technical knowledge is required to use theAHP. For instance, if we consider that the priority vector can be derived using the method of the normalized columns, mentioned in §2.13, and consistency can be estimated by using the harmonic consistency index, in §2.2.4, then one can use the AHP at a basic level by using only elementary operations! Nevertheless, in spite of this possible simplicity, it is difficult to find an aspect of the AHP, or of pairwise comparison matrices, which has not been object of heated debates. Many of these debates are still open and probably will be so for much longer. However, even if inconclusive, it would be a mistake to regard them as pointless, since they contributed to create awareness around the AHP.

Pairwise Comparison Matrices Priority Vector Wallenius Elementary Operations Private Sector
These keywords were added by machine and not by the authors. This process is experimental and the keywords may be updated as the learning algorithm improves.
This is a preview of subscription content, log in to check access.