Let’s Get Engaged! Crossing the Threshold of Marketing’s Engagement Era 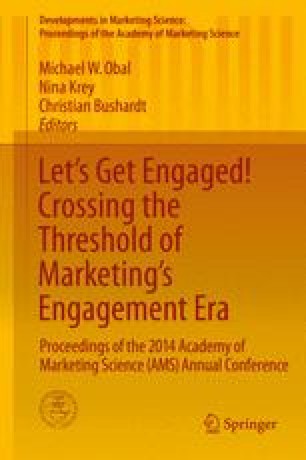 Let’s Get Engaged! Crossing the Threshold of Marketing’s Engagement Era pp 491-494 | Cite as

Saturated Nation in Social Networking Sites; An Examination of the Negative Effect of Facebook’s Brand Communities on Brand-Consumer Relationship

Social media today is highly sought after by marketers as it is being hailed as the turning point in how brands will be marketed (Owyang et al. 2009; Qualman 2010; Li and Bernoff 2011). Nonetheless, a careful evaluation needs to be done on the issues and risks this social platform presents as people are becoming overwhelmed with the fast paced society and its faster information production and distribution (Shenk 2003). Saturation, referred to as a communication overload (Shaw 1976), is one aspect of social networking sites’ risks that can negatively affect the brand-consumer relationship. Saturation is driven by information quantity (Streufert and Driver 1967; Jacoby 1977; Kerr and Hiltz 1982; Hiltz and Turrof 1985; Johnson 1998; Shenk 2003), the number of the channels or communities people engage in (Power and Wren 2011) and subsequently the limit to the number of online social relationships consumers can maintain with other members or brands at any given time (Buys and Larsen 1979; Dunbar 1993).