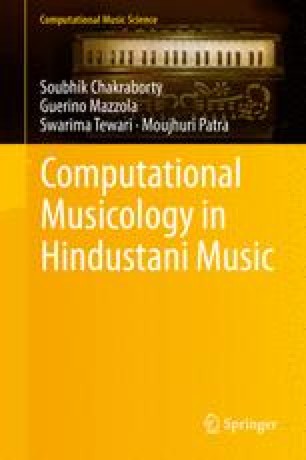 The present chapter gives an interesting statistical comparison of two ragas, namely, Bhairav (morning raga) and Bihag (night raga). Metric and melodic properties of notes are analyzed using RUBATO along with distinct transitory and similar looking non-transitory pitch movements (but possibly embedding distinct emotions!) between the notes for both the ragas. According to Strawn (1985), “a transition includes the ending part of the decay or release one note, the beginning and possibly all of the attack of the next note and whatever connects the two notes.” Hence in addition to the study on modeling a performance, a count for distinct transitory and similar looking non-transitory frequency movements (but possibly embedding distinct emotions!) between the notes was also taken. In the characterization of ragas in Indian music, not only the notes and note sequences but how they are rendered are important. There is a concept of alankar in Indian music meaning ornament (of course in a musical sense!). The shastras have categorized alankars into Varnalankar and Shabdalankar (http://www.itcsra.org/alankar/alankar.html). The varnas include sthayi (stay on a note), arohi (ascent or upward movement), awarohi (descent or downward movement) and sanchari (mixture of upward and downward movement). This classification of alankars relate not only to the structural aspect of the raga but also to the raga performance. A non-transitory movement would depict stay on a note for short or long duration. In the graph it looks close to a horizontal line with some tremor (the tremor is because pitch is never steady).

Upward Movement Downward Movement Note Sequence Music Theory Musical Structure
These keywords were added by machine and not by the authors. This process is experimental and the keywords may be updated as the learning algorithm improves.
This is a preview of subscription content, log in to check access.