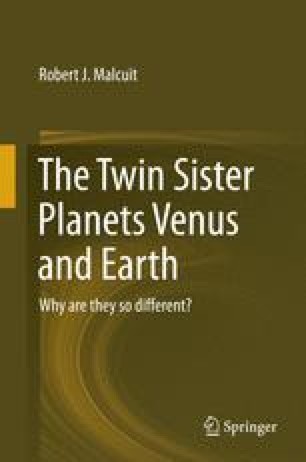 Most scientists that are interested in the habitability of planets can agree on the definition of a habitable zone. But from the quotes shown above, it is clear that there is very little agreement for how prevalent life forms are beyond the Earth. We geoscientists know that the Earth has had a complex evolution and that is a large part of the problem. The metazoan life forms on Earth appear to be a result of this complex evolution of the planet. How about the origin of the simpler forms of life? Could a less complex planetary evolution result in less complex life forms? And does this less complex planet evolution scheme make it more probable to find habitable planets in other star-planet systems?

Ocean Tide Terrestrial Planet Lunar Orbit Habitable Zone Earth Radius
These keywords were added by machine and not by the authors. This process is experimental and the keywords may be updated as the learning algorithm improves.

“Planets and stars are supremely important to every member of the human race. Although most people never give it much thought, we live on a planet and are warmed and nourished by a star, not just any planet and not just any star, but a particular kind of planet with certain essential characteristics, and a particular kind of star. The central purpose of this book is to spell out the necessary requirements of planets on which human beings as a biological species (Homo sapiens) can live, and the essential properties required of the stars that provide heat and light to such planets.” From Dole ( 1964 , p. vii).

“It is almost certain that no other planet in our solar system now supports the phenomenon of life. The question still remains, however, as a persistent field of speculation, as to how many other stars in the galaxy or the universe as a whole may support a planet like Earth. In science fiction and fantasies like Star Wars, such stars are numerous. Even in the scientific community, a blue-ribbon panel established by the National Aeronautics and Space Administration has designated a major international program to search for extra-terrestrial intelligence (SETI) (Morrison et al. 1977), and a branch of science (so far without content) called exobiology has been designated and widely accepted. In view of such a great interest it seems desirable to seek an estimate of the fraction of stars that might have associated with them an Earthlike planet and the probability that such a planet would be capable of supporting a prolonged evolutionary history of organisms.” From Pollard ( 1979 , p. 653).

“My own guess is that, just as we learned that the Sun is an ordinary star, we will find that Earth is an ordinary planet and that life itself is a commonplace phenomenon that exists on most, or all, such planets.” From Kasting ( 2010 , p. 298).