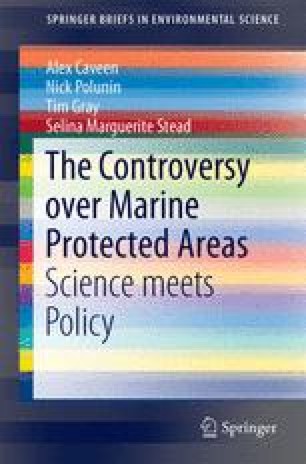 The Controversy over Marine Protected Areas pp 81-112 | Cite as

Case Study of the ‘English Patient’

In this chapter, a case study of England’s recent experiences of a consultation process about the proposed designation of Marine Conservation Zones (MCZs) is analysed using the debate between NPs and SCs developed in Chap. 1 and the policy network analysis developed in Chap. 2. The English case was chosen for study for two reasons: partly because the waters around the UK (especially the North Sea) have been subjected to more intensive research scrutiny than any other inshore area around the world so data deficiency should be comparatively low; and partly because the UK demonstrates in a graphic way the controversy raised by proposals to introduce protected areas in developed countries with temperate climates where major commercial fisheries have been established for generations. From an analysis of the ‘grey’ literature and of key-informant interviews with 21 members of the English policy community who had input into the policy debates on MCZs, the contrasting NP and SP viewpoints are used as lenses to discuss contrasting opinions on five key themes regarding the planning of the MCZ network: objectives; data deficiencies; time-scales; consultation; and equity. The chapter builds on the work undertaken in Chap. 2 that explained the role that two policy network models—epistemic community (EpC) and advocacy coalition (AC)—had on influencing policymakers who work at the international level to write recommendations for MPA networks.

Reference Area Marine Protected Area Marine Reserve Regional Project Fishing Industry
These keywords were added by machine and not by the authors. This process is experimental and the keywords may be updated as the learning algorithm improves.
This is a preview of subscription content, log in to check access.