Re-Thinking Time at the Interface of Physics and Philosophy 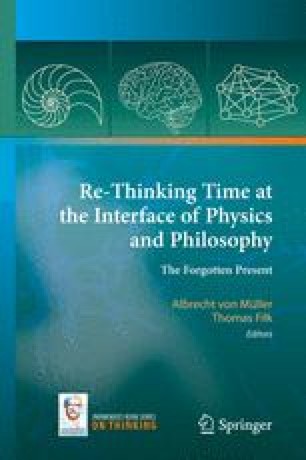 A Philosophical Invitation to Rethink Time and Reality and to Discover the Autogenetic Nature of Our Universe
Chapter
Part of the On Thinking book series (ONTHINKING, volume 4)

This essay proposes a radical re-thinking of time and reality. “With Kant beyond Kant” it is argued that all theories are based on categorial foundations. These are interrelated symmetry breakings that enable, but by enabling also constrain everything that we can think thereafter. Both the enigmatic character of quantum physics (QP) and its incompatibility with general relativity theory (GRT) are rooted in our unawareness of these categorial underpinnings. Metaphorically speaking, this unawareness results in a categorial “facticity imprisonment” of our thinking. We inadvertently reduce reality to its factual footprints and time to its sequential structure. Both are correct and important aspects of time respectively reality. But they provide only a partial picture. In order to overcome the rift between the two foundational theories of modern physics, it is necessary to unearth the different categorial underpinnings of the two theories, and to develop a richer, overarching categorial framework.

Facts are just the traces of the actual taking place of reality, left behind on the co-emerging canvas of local spacetime. The actual taking place of reality occurs still in the primordial, still non-local form of time, for which the notion “timespace of the present” (TSP) is introduced. Interestingly enough, Albert Einstein already complained about the “painful, but inevitable abandonment” of the present in physics vis-à-vis Rudolf Carnap (Carnap’s intellectual bibliography. In: Schilpp PA (ed) The Philosophy of Rudolf Carnap. Open Court Publishing, La Salle, pp 3–84, 1963). A necessity to abandon the present exists, however, only as long as time is reduced to its linear-sequential aspect, i.e., as long as the present is erroneously reduced to a point-like now.

By recognizing the non-local TSP as the primordial form of physical time, the sequential structure of time becomes a derivative feature—and with this step a radically novel way to interpret QP and its relation to GRT become feasible. The two theories address different chrono-ontological portraits of reality. QP addresses the actual taking place of reality, i.e., the actual “coming into being” of facts, as it occurs still in the TSP. Classical and relativistic physics, instead, address already the factual portrait of time and reality.

In the novel account, also our human experience of a present can be seen in a radically novel light. It no longer needs to be derogated as a subjective confabulation, distorting the correct perception of physical time. Instead, it turns out that our perception of the present is the most advanced adaptation of cognitive evolution to the actual taking place of reality—as it occurs still in the TSP. This new view is strongly supported by considering Darwinian evolution. In neurobiological terms, the experience of the present—and its twin, the phenomenon of explicit self-awareness—are the two most demanding and “costly” endeavors of the human brain. Wouldn’t they bring us to a more accurate, and, thus, more powerful appreciation of time and reality, they would have never developed in the first place or they would have, at least, been swept away by evolutionary selection pressures.

The novel conceptual framework becomes possible by unearthing the categorial foundations of our theories, i.e., by recognizing their nontrivial structure of these foundations and by appreciating their crucial role for all subsequent theorizing. For Kant the basis of his epistemological considerations was Newtonian physics. Modern physics progressed far beyond that—but hitherto it had not taken its own categorial foundations into account. Only by unearthing them, and by making them part of our theories, it will be possible to overcome the impasse of modern physics. The theory of an autogenetic universe offers the conceptual framework for that.

Human Cognition Modern Science Modern Civilization Categorial Framework Local Spacetime
These keywords were added by machine and not by the authors. This process is experimental and the keywords may be updated as the learning algorithm improves.
This is a preview of subscription content, log in to check access.