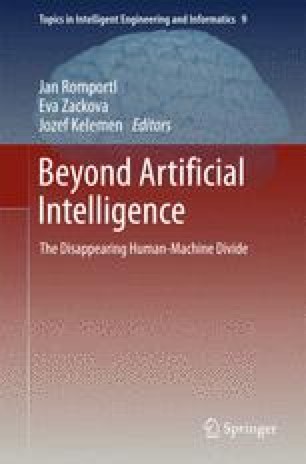 Beyond Artificial Intelligence pp 211-216 | Cite as

This position paper offers an answer to the question about the difference between artificial and natural. By building up a dichotomy between physis and logos, it argues that this difference is given by language and by what can be grasped with words. It concludes with an assertion that Good Old-Fashioned AI (GOFAI) cannot create anything natural, whereas emergent AI can, because emergent phenomena are intrinsically natural, which is a very important fact for the AI field. The paper also offers a view on the difference between the roles of an AI engineer in GOFAI and in emergent AI.

This work was supported by project “Interdisciplinary Partnership for Artificial Intelligence” (CZ.1.07/2.4.00/17.0055), OP Education for Competitiveness, funded by the European Social Fund in the Czech Republic and by the State Budget of the Czech Republic.