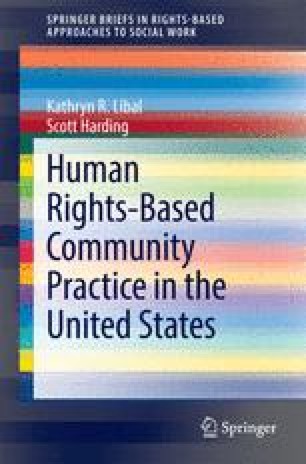 Human Rights-Based Approaches to Community Practice in the United States: A Call to Action

As the movement for human rights has matured in the United States, local organizations are increasingly making claims for social inclusion and equality using the language of human rights. This chapter outlines the value of using a rights-based rather than a needs-based approach by community practitioners to address social exclusion and inequality. As a form of practice, a rights-based approach seeks to hold government accountable for ensuring that human rights are met for all members of society. The authors define the concept of human rights and outline key aspects of the international human rights system. They also highlight the United States’ reluctance to participate fully within the global human rights system—“American exceptionalism”—particularly regarding economic and social rights. Most human rights practice in the United States has focused on judicial or legislative processes and has relied on a top-down approach to achieve formal legal change to comply with international human rights norms. Though important, this work has often failed to emphasize grassroots mobilization and specific community-based efforts to promote and actualize human rights. The authors explain the foundation for rights-based community practice, underscoring core values of social inclusion, civic engagement, and deliberative democracy as crucial factors in human rights mobilization. They outline how a rights-based approach offers the potential of greater participation by a broader segment of community members on specific campaigns. Community engagement is also critical for implementation of laws and policies. Without community participation specific human rights gains made in the legal and policy realm may not be realized.

Civic Engagement Social Inclusion Community Practice Extreme Poverty Universal Declaration
These keywords were added by machine and not by the authors. This process is experimental and the keywords may be updated as the learning algorithm improves.

Where, after all, do universal rights begin? In small places, close to home—so close and so small that they cannot be seen on any maps of the world. Yet they are the world of the individual person; the neighborhood he lives in; the school or college he attends; the factory, farm or office where he works. Such are the places where every man, woman, and child seeks equal justice, equal opportunity, equal dignity without discrimination. Unless these rights have meaning there, they have little meaning anywhere. Without concerned citizen action to uphold them close to home, we shall look in vain for progress in the larger world.

For Discussion: Is Extreme Poverty in the United States a Human Rights Violation?

The United Nations Independent Expert on the question of human rights and extreme poverty, Arjun Sengupta, visited the United States in 2005. During his ten-day visit, he met with government representatives and non-governmental organizations “working with and for people living in poverty.” He held meetings in representative communities across the country, including New York City; Immokalee, Florida; New Orleans and Baton Rouge, Louisiana; Jackson and the Delta region of Mississippi; Appalachia (Kentucky); and Washington, D.C. Following investigations, Sengupta made the following comments and recommendations:

The United States is encouraged to adopt the following steps: First, the United States authorities, in cooperation with civil society and expert organizations, should identify a fraction of its population as suffering from conditions of extreme poverty (defined in terms of a combination of income poverty, human development poverty, and social exclusion). Second, once this group has been identified, the United States authorities should adopt legislative provisions to accord them the legal entitlement to the programmes that are needed to take them out of these conditions of poverty. This legal entitlement would allow extremely poor persons, or their representatives, to seek redress in the courts if they are denied their entitlements. Third, in order to fund such programmes, the federal Government may create a fund with the sole purpose of abolishing the conditions of extreme poverty (excerpted from the UN Independent Expert on the Question of Human Rights and Extreme Poverty, 2005, p. 2).

For Discussion: My Voice Counts—The Human Right to Participate

The following was published on the Office of the High Commissioner for Human Rights Web site in recognition of Human Rights Day on December 10, 2012. The focus of the 2012 Human Rights Day was “Inclusion and the Right to Participate in Public Life.” Social inclusion and public participation extends far beyond exercising one’s right to vote in elections. It entails having access to and being heard in a range of public settings, often at the community level. Everyday Democracy (www.everydaydemocracy.org) is an example of a group that seeks to foster such inclusive participation in community life. While in the United States this is often cast as civic engagement, it is directly linked to the right participate in public life as a human right. Read the following statement excerpted from the Office of the High Commissioner for Human Rights briefing on the 2012 Human Rights Day and discuss the questions that follow.

Everybody has the right to have their voice heard and to have a role in making the decisions that shape their communities. Each one of us should be able to choose those people who will represent us in all governance institutions, to stand for public office, and to vote on the fundamental questions that shape our individual and collective destinies.

The return on that investment is a society tuned to the needs and aspirations of its constituents. Where this fundamental right is respected, each and every one of us is offered the opportunity to join in the debate, to offer ideas, to campaign for change—to participate.

Fulfillment of the right to participate in public life is fundamental to the functioning of a democratic society and an effective human rights protection system. Inclusion of ALL in decision-making processes is an essential precondition to the achievement of both.

Millions of people have gone onto the streets in the past few years to have their say, to protest the unyielding, unresponsive governments which have shut them out. They have demanded and continue demanding respect for their fundamental human rights, including their right to have a voice and for that voice to count.

Elsewhere, many remain silent, unable to take any part in the public lives of their communities. Often they cannot stand for office, vote for public officials or in referenda: at times they are prohibited from expressing their views at all.

Women, people with disabilities, individuals belonging to minorities and indigenous peoples, the poor, those with little or no education, remote rural communities, continue to be disenfranchised in many places, sometimes even prohibited from participation in public life or excluded on the basis of discriminatory laws or practices or because there is no appropriate infrastructure which would facilitate their inclusion.

These values, endorsed by the international community, are legally binding obligations upon the 167 States Parties to the International Covenant on Civil and Political Rights which stipulates that the right to participate in the conduct of public affairs applies to “every citizen without exception.”

In the face of the extraordinary contemporary challenges for democracy, climate change, globalization, the on-going economic and financial crises in many countries, and the explosion of global Web-based communication, among others, participation and inclusion are critical in the development and implementation of durable, workable policy solutions.

Your voice, your right. Your voice counts ….

(Excerpted from: Office of the High Commissioner for Human Rights, http://www.ohchr.org/EN/NewsEvents/Day2012/Pages/HRDay2012Intro.aspx).

Organizations Engaged in Human Rights-Based Practice in the United States

The following is a list of organizations that focus efforts on social and economic rights mobilization at national, state, and local levels. Some, like the US Human Rights Network, represent coalitions of hundreds of other groups. As the movement expands, the list of organizations also grows.