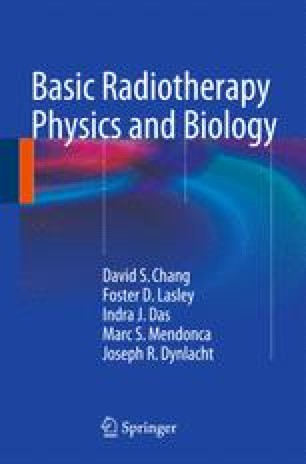 Photon beams are characterized by their intensity and energy. The attenuation coefficient measures the rate at which the beam is attenuated (loses intensity) at depth. A half-value layer is a thickness of material that decreases intensity to half of its original value. In a polyenergetic photon beam, lower energies are attenuated more rapidly than higher energies. Therefore, the average energy of the beam increases with attenuation. This effect is known as filtration or beam hardening. Beam quality is a measure of a photon beam’s penetration, and can be measured by thickness of a half-value layer in a specified metal, or by percentage depth dose in water.

Attenuation Coefficient Beam Quality Primary Beam Photon Beam Narrow Beam
These keywords were added by machine and not by the authors. This process is experimental and the keywords may be updated as the learning algorithm improves.
This is a preview of subscription content, log in to check access.