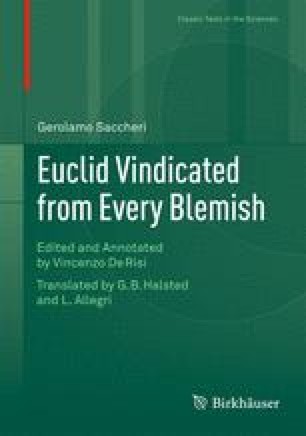 Euclid Vindicated from Every Blemish pp 70-191 | Cite as

Euclid Vindicated from Every Blemish: Book One

Of all who have learned mathematics, none can fail to know how great is the excellence and worth of Euclid’s Elements. As erudite witnesses here I summon Archimedes, Apollonius, Theodosius, and others almost innumerable, writers on mathematics even to our times, who use Euclid’s Elements as foundation long established and wholly unshaken. But this so great celebrity has not prevented many, ancients as well as moderns, and among them distinguished geometers, maintaining they had found certain blemishes in these most beauteous nor ever sufficiently praised Elements. Three such flecks they designate, which now I name.

The first pertains to the definition of parallels and with it the Axiom which in Clavius is the thirteenth of the First Book of the Elements, where Euclid says: If a straight line falling on two straight lines, lying in the same plane, make with them two internal angles toward the same parts less than two right angles, these two straight lines infinitely produced toward those parts will meet each other. No one doubts the truth of this Assertion; but solely they accuse Euclid as to it, because he has used for it the name Axiom, as if obviously from the right understanding of its terms alone came conviction. Whence not a few (withal retaining Euclid’s definition of parallels) have attempted its demonstration from those propositions of Euclid’s First Book alone which precede the 29th, wherein begins the use of the controverted Assertion.

Acute Angle Obtuse Angle Bounded Distance Internal Angle Determinate Limit
These keywords were added by machine and not by the authors. This process is experimental and the keywords may be updated as the learning algorithm improves.
This is a preview of subscription content, log in to check access.