The Highway Capacity Manual: A Conceptual and Research History 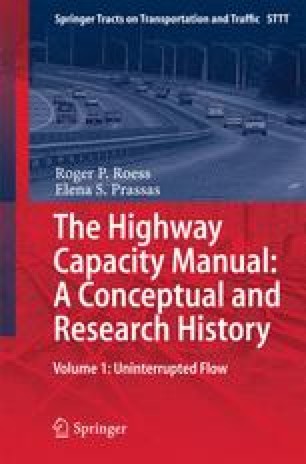 The Highway Capacity Manual: A Conceptual and Research History pp 451-466 | Cite as

The Future of the Highway Capacity Manual

The Highway Capacity and Quality of Service Committee (HCQSC) will be preparing a major update to the 2010 HCM targeted for 2015. The primary contractor for this update is Kittelson and Associates, led by John Zegeer, a former chair of the HCQSC. It does so even though the 2010 HCM (which was only distributed in early 2011) has not been subject to extensive use, and little user feedback on it has been received. In some parts of the nation, it has not been officially adopted yet.

Urban Street Sixth Edition Service Concept User Perception Service Designation
These keywords were added by machine and not by the authors. This process is experimental and the keywords may be updated as the learning algorithm improves.
This is a preview of subscription content, log in to check access.