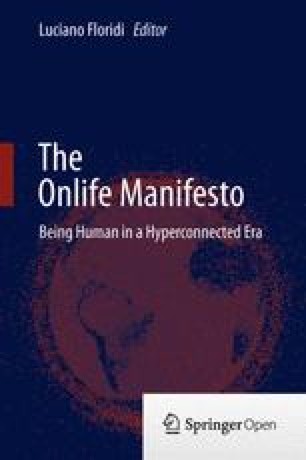 The Onlife Manifesto pp 1-3 | Cite as

This is the Introduction to The Onlife Manifesto volume.

Background Document Official Opening Short Commentary Commission Directorate European Union Institution
These keywords were added by machine and not by the authors. This process is experimental and the keywords may be updated as the learning algorithm improves.
Download chapter PDF

On the 8th of February 2013, The Onlife Manifesto 1 was released at an inaugural event held in Brussels by DG Connect, the European Commission Directorate General for Communications Networks, Content & Technology.2

The Manifesto was the outcome of the work of a group of scholars, organised by DG Connect, which I had the privilege to chair: Stefana Broadbent, Nicole Dewandre, Charles Ess, Jean-Gabriel Ganascia, Mireille Hildebrandt, Yiannis Laouris, Claire Lobet-Maris, Sarah Oates, Ugo Pagallo, Judith Simon, May Thorseth, and Peter-Paul Verbeek.

During the previous year, we had worked quite intensely on a project entitled The Onlife Initiative: concept reengineering for rethinking societal concerns in the digital transition.3 We decided to adopt the neologism “onlife” that I had coined in the past in order to refer to the new experience of a hyperconnected reality within which it is no longer sensible to ask whether one may be online or offline. Also thanks to a series of workshops organised by DG Connect, we had investigated the challenges brought about by the new digital technologies. We had debated the impact that ICTs are having on human life, and hence how one may re-engineer key concepts—such as attention , ownership, privacy , and responsibility—that are essential in order to gain the relevant and adequate framework within which our onlife experience may be understood and improved.

In the course of our investigations, we soon realised that the output of our efforts would have been more fruitful by summarising it in a short document—which soon became known as The Onlife Manifesto —and a series of short commentaries (volunteered by some of us) and longer essays (contributed by each of us) that would explain and position The Manifesto within the current debates on Information and Communication Technologies (ICTs).

The inaugural event represented the official opening of the public discussion of our work. Many more public meetings and international presentations followed.4 As a result, this book is actually a synthesis of the research done in 2012 and the feedback received in 2013.

The book is organised in such a way as to give priority to The Onlife Manifesto . This is the document around which the rest of the book revolves. It is followed by eight short commentaries by Ess, my self, Ganascia, Hildebrandt, Laouris, Pagallo, Simon, and Thorseth. The next chapter is the background document. This contains the material that was used to start and frame the conversations during the initial phases of the project. There follow 12 chapters. In them, members of the group, myself included, have presented some of the ideas that guided our contribution to the Manifesto. Although each chapter may be read independently of the rest of the book, it is a modular part of the scaffolding that led to the Manifesto. A short conclusion, which is more a “to be continued”, ends the book. In terms of authorship, any material that is not explicitly attributed to some author is to be attributed to the whole group, as a collaborative work, endorsed by each of us.

So much for the outline of the project. I shall not add any further details because these can be found in the background document. In terms of an overview of the book’s contents, in the following pages we argue that the development and widespread use of ICTs are having a radical impact on the human condition . More specifically, we believe (see the Preface that introduces The Manifesto) that ICTs are not mere tools but rather environmental forces that are increasingly affecting:

In each case, ICTs have a huge ethical, legal, and political significance, yet one with which we have begun to come to terms only recently.

We are also convinced that the aforementioned impact exercised by ICTs is due to at least four major transformations:

The impact summarised in (1)–(4) and the transformations behind such an impact, listed in (a)–(d), are testing the foundations of our philosophy, in the following sense. Our perception and understanding of the realities surrounding us are necessarily mediated by concepts. These work like interfaces through which we experience, interact with, and semanticise (in the sense of making sense of, and giving meaning to), the world. In short, we grasp reality through concepts, so, when reality changes too quickly and dramatically, as it is happening nowadays because of ICTs, we are conceptually wrong-footed. It is a widespread impression that our current conceptual toolbox is no longer fitted to address new ICT-related challenges. This is not only a problem in itself. It is also a risk, because the lack of a clear conceptual grasp of our present time may easily lead to negative projections about the future: we fear and reject what we fail to semanticise. The goal of The Manifesto, and of the rest of the book that contextualises, is therefore that of contributing to the update of our conceptual framework. It is a constructive goal. We do not intend to encourage a philosophy of mistrust. On the contrary, this book is meant to be a positive contribution to rethinking the philosophy on which policies are built in a hyperconnected world, so that we may have a better chance of understanding our ICT-related problems and solving them satisfactorily. Redesigning or reengineering our hermeneutics, to put it more dramatically, seems essential, in order to have a good chance of understanding and dealing with the transformations in (a)–(d) and hence shape in the best way the novelties in (1)–(4). It is clearly an enormous and ambitious task, to which this book can only aspire to contribute.

Too many people helped us since the shaping of the project for The Onlife Initiative in 2011 to be able to mention them explicitly here. However, a few individuals have been pivotal in the realization of this book, and to them go all our gratitude. We, as a group, would like to thank, within DG Connect, Robert Madelin, Director-General; Franco Accordino, Head of the Task Force “Digital Futures”; and Roua Abbas, Igor Caldeira, Orestis Kouloulas, Julia Molero-Maldonado, and Nicole Zwaaneveld, of the Secretariat of the Advisors to the Director-General; and, within Springer, Ties Nijssen, Publishing Editor for History and Philosophy of Science & Logic, and Lue Christi, Editorial Assistant for History and Philosophy of Science & Logic. My personal thanks go to all the onlifers, as we came to be known, for their wonderful contributions and for all that I have learnt from them, and to Penny Driscoll, my PA, for her indispensable help in editing the volume.