Nils Petter Gleditsch: Pioneer in the Analysis of War and Peace 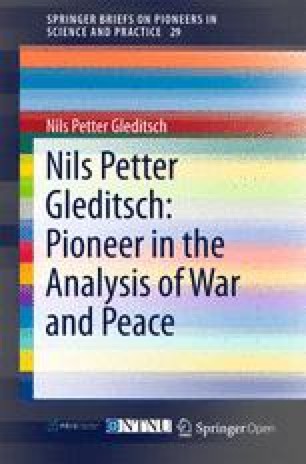 Nils Petter Gleditsch: Pioneer in the Analysis of War and Peace pp 151-156 | Cite as

The Decline of War—The Main Issues

The debate on the waning of war has recently moved into higher gear and this symposium contributes to the debate. This introductory article outlines briefly some of the major issues: nature versus nurture, the reliability of the data, how broadly violence should be defined, whether there is more agreement on the phenomenon than on its causes, and finally whether the future will be like the past.

Nature Versus Nurture High Gear Battle Deaths Scarcity Conflicts Unfavorable Neighborhood
These keywords were added by machine and not by the authors. This process is experimental and the keywords may be updated as the learning algorithm improves.
Download chapter PDF

The debate on the waning of war has recently moved into higher gear and this symposium contributes to the debate. This introductory article outlines briefly some of the major issues: nature versus nurture, the reliability of the data, how broadly violence should be defined, whether there is more agreement on the phenomenon than on its causes, and finally whether the future will be like the past.

Although several authors have announced a ‘waning of war’ in recent decades (notably Mueller 1989; Payne 2004), this literature has moved into a higher gear with the recent spate of literature on this topic.1 Historians (Gat 2006, 2013; Muchembled 2012) and political scientists (Goldstein 2011; Lacina et al. 2006) have entered the fray, along with a science journalist (Horgan 2012), a web designer (Richards 2010)—and, of course, a cognitive psychologist with a massive 800-page tome (Pinker 2011). Despite the breadth of this literature, this is not the end of the argument, but rather the start of a long debate, to which we hope to make a modest contribution with this forum.2 It includes a statement on human nature and violence (Pinker 2013) and continues with two contributions that are more skeptical to what has become known as the ‘declinist’ literature (Levy/Thompson 2013; Thayer 2013). Here, I will attempt to summarize some of the main issues that have emerged in the debate so far.

Given the extensive polemics against ‘the blank slate’ in Pinker (2002), one might have expected that he would base his argument relating to violence strongly on changes in human nature. However, Pinker (2011, 2013) argues that human nature continues to hold a potential for violence as well as a potential for peace, and that environmental factors must be taken into account if we are to understand how we curb our tendency to resort to violence. Thayer (2013) agrees with this, although he argues that Pinker underestimates the difficulty in suppressing our inner demons.

For the recent decline of war, Pinker, Goldstein, and others rely heavily on the UCDP/PRIO data (Gleditsch et al. 2002) and the PRIO battle deaths data (Lacina/Gleditsch 2005). These data are constantly being challenged. For instance, Obermeyer et al. (2008) argued that it is more appropriate to look at a broader set of war deaths, and that there is no evidence of a decline in war deaths over the past 50 years. Spagat et al. (2009), however, found that to reach this conclusion, they had to ignore data for the periods after 1994 and before 1955, base their time trends on extrapolations from a biased convenience sample of only 13 countries, and rely on an estimated constant that is statistically insignificant. Gohdes/Price (2013) argue that while the PRIO battle deaths dataset currently offers the most comprehensive assembly of such data, the information used to establish the dataset is neither sufficient nor of appropriate quality to offer a clear answer as to whether battle deaths have decreased or increased since the end of the Second World War. Lacina/Gleditsch (2013) respond that very strong assumptions must hold in order for measurement errors to explain the trend in battle deaths and conclude that the waning of war is real. This debate is not a sign of weakness. On the contrary, if the data can withstand multiple challenges, our confidence in the real nature of the trend can only increase. Of course, short-term changes like a half-dozen decrease in the number of ongoing armed conflicts in 2010 and a corresponding increase in 2011 (Themnér/Wallensteen 2012) reflect mainly how a number of conflicts hover around the threshold of 25 annual deaths. Such fluctuations should be ignored in the debate about the long-term waning of war.

10.4 What Kinds of Violence Should Be Included?

For a long time, the statistical study of war was focused almost exclusively on interstate war (Singer/Small 1972). While civil war had been the dominant form of conflict in terms of the number of ongoing conflicts since the 1950s, the cross-national study of civil war did not really take off until the late 1990s (Collier/Hoeffler 1998; Hegre et al. 2001; Fearon/Laitin 2003). Despite the high overlap of war and one-sided violence (genocide, politicide), these phenomena have generally been studied separately. Homicide has hardly been studied by conflict scholars. Payne (2004) and Pinker (2011) have broken with this tradition and offer a unified view of human violence, which is even broadened to include painful interrogation, physical punishment of children, and the like. In terms of the overall human propensity for violence, the wider approach seems justified—both one-sided violence and homicide kill more people than wars and civil wars. But, putting too many forms of violence into the same category runs the risk of undermining our ability to find causal explanations, although broad conceptualizations such as ‘motive versus opportunity’ (Collier/Hoeffler 1998) run through the literatures on international war and civil war as well as crime. Levy/Thompson (2013), however, remain skeptical of our ability to come up with theoretical explanations that will capture the various forms of violence at the different levels of social organization.

A key point in the controversy in the waning of war literature is the use of relative rather than absolute numbers. While World War II certainly claimed more lives than any individual war in the nineteenth century and possibly more lives than in any human-induced disaster ever, its victims made up a smaller fraction of world population than several earlier conflicts. On this basis, the common characterization of the twentieth century as the world’s most violent century becomes questionable (Gat 2013). This simple point invites opposition, even anger. The present writer was pointedly asked in a newspaper interview3 whether a repetition of the Holocaust today would be a smaller crime because world population has more than doubled since that time. Most people would probably agree that the answer to this question is ‘no’. On the other hand, the fact that we have not had two or more Holocausts in recent decades can still be seen as an indication of progress toward the reduction in violence. In any case, from World War II until today, the number of people killed in armed conflict and genocide has been in decline, whether you look at absolute or relative figures. More demanding is Thomas Pogge’s critique—that human progress is less than its potential.4 It is certainly arguable that by 2013, we ought to have come further in our reduction in violence as a tool in human affairs. But, it would be hard indeed to establish a baseline over time for our potential to do so.

10.6 More Agreement on Phenomenon than on Explanations

Despite the various critiques, there is wide agreement on the decline of war and other forms of violence. For instance, Levy/Thompson (2013) do not dispute the analyses of trends in war in Pinker (2011), and Thayer (2013) also finds that he ‘convincingly demonstrates’ the decline in violence. However, the reasons for the decline are less clear. Levy/Thompson (2013: 412) would ‘give a greater causal role to material than cultural factors’, and Thayer (2013: 405) finds that the cause (or causes) for the decline are less obvious than the decline itself and that ‘each major theory of international relation offers an explanation.’ In other words, there is not a lack of explanations, but we are unable to choose between alternative plausible theories. That there is greater agreement on the existence of a phenomenon than its explanation is not uncommon in the social sciences, as the literature on the interstate democratic peace illustrates (see for example, Schneider/Gleditsch 2013). Indeed, even in modern medicine, there is frequently greater agreement on the fact that something works than on why it works.5

Even if the trend toward a reduction in violence is accepted, that trend cannot necessarily be extrapolated into the future. Both Thayer (2013) and Levy/Thompson (2013) are skeptical of the declinist thesis for this reason. Thayer argues that there is a lack of ‘better angels’ outside the West and that even the West may backslide. Moreover, he feels that Pinker underestimates the importance of the international system and the distribution of power. The rise of China is of particular concern. Levy & Thompson argue that a panel in 1912 could have extrapolated from current trends toward a decline of war, completely missing the factors that soon led to World War I.

While Thayer (2013) sees US primacy as a stabilizing force (and the challenge of China as a threat to the stability), almost the direct opposite view is found in ‘left’ critiques of the declinist view. For instance, Herman/Peterson (2012) argue that world domination by the United States has led to a series of wars and worldwide repression that take the world in the wrong direction and which eventually must lead to a counter-reaction. Another skeptical school of thought is found in environmentalist writing about the destructive effects of environmental change in general and climate change in particular. Pundits and politicians have raised the specter of a warming world ridden by scarcity conflicts, but so far, there is little systematic evidence that points in this direction (Gleditsch 2012; Scheffran et al. 2012; Theisen et al. 2013). A more optimistic note is struck by Hegre et al. (2013), who find that the factors robustly linked to civil war in the past (such as poverty, ethnic dominance, unfavorable neighborhood) are projected to decrease in the period 2010–50, leading these authors to predict a halving of the proportion of the world’s countries that have internal armed conflict.