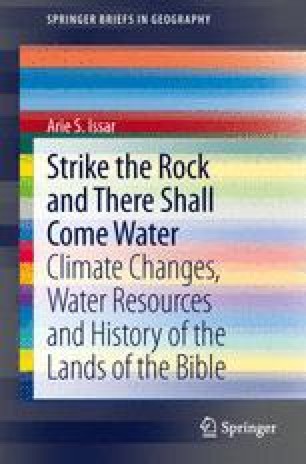 A spell of a warm and arid climate at ca. 1800 B.C. brought the Hyksos invasion of Egypt and at about 1700 B.C. a king of Hyksos origin occupied the throne. At the same time officials of Apiru (Hebrew?) origin reached high posts in the government of Egypt enabling their clans still living in drought-stricken Canaan to enter Egypt and settle on irrigated land in the delta area in the land of Goshen. The Hyksos were overthrown in 1558 B.C. by the Egyptian Ahmose and the Apiru were enslaved. Toward the end of this dynasty king Akhenaten brought about a religious revolution by shifting the seniority in the Egyptian pantheon from Amun to Aten, the sun god. A cold humid climate, which started about 1300 B.C., had a negative environmental impact on Egypt, which forms the core of the story of the ‘Ten Plagues’. The cold humid spell caused the greening of the Sinai Desert, which encouraged the Hebrews to leave Egypt.

Cold Spell Rain Storm Volcanic Explosion Biblical Story Libyan Desert
These keywords were added by machine and not by the authors. This process is experimental and the keywords may be updated as the learning algorithm improves.
This is a preview of subscription content, log in to check access.