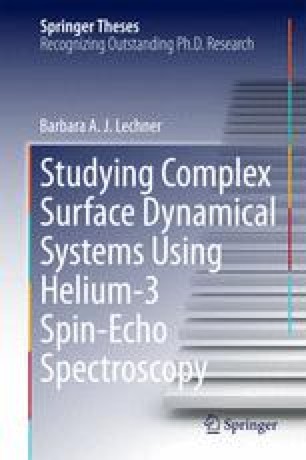 The present work was motivated by the desire to extend the field of application for helium-3 spin-echo spectroscopy from atomic and small molecular adsorbates to more complex surface dynamical systems. The main findings and conclusions are summarised here.

Diffusive Motion Bridge Site Jump Diffusion Molecular Adsorbate Hollow Site
These keywords were added by machine and not by the authors. This process is experimental and the keywords may be updated as the learning algorithm improves.
Download chapter PDF

The present work was motivated by the desire to extend the field of application for helium-3 spin-echo (HeSE) spectroscopy from atomic and small molecular adsorbates to more complex surface dynamical systems. This objective has been addressed with a twofold approach. Firstly, improvements were made to the experimental equipment with the construction of MiniScat, a new helium atom scattering apparatus, as well as an improved helium beam source. Secondly, a series of related five-membered aromatic adsorbates on the hexagonal Cu(111) surface were investigated to study the surface dynamics of these prototypical organic molecules and to ascertain the degree to which the existing theoretical framework extends to molecular adsorbates.

The design and construction of MiniScat was presented in Chap.  3. Characterisation measurements have demonstrated the performance of the new instrument. Due to the uniqueness of the HeSE spectrometer, measurement time is limited and the careful preparation and scheduling of experiments is required. MiniScat now provides a facility for sample preparation and equipment development purposes, while also acting as a standalone spectrometer for structural studies that cannot be performed on the HeSE machine, such as thermal desorption studies. Since the study of more complex systems routinely creates a need for extensive preliminary work to investigate the adsorption behaviour before the actual dynamics measurements can be performed, MiniScat is a crucial stepping stone towards the aim of the present thesis and has already been in productive use in the Surface Physics Group.

Improvements of the HeSE spectrometer itself were achieved by developing a new helium beam source, as presented in Chap.  4. The source is one of the main components of the instrument and determines the energy resolution of the experiment through the helium beam energy. Due to a tendency of complex molecular adsorbates to move more slowly than atomic species, a need for improved resolution arises with the investigation of increasingly complex adsorbate systems. The new high intensity helium beam source can operate at beam energies as low as 2.5 meV, improving the resolution of the HeSE spectrometer by a factor of 5.5 and extending the measurement range from a previously longest accessible spin-echo time of 680 ps to 3.8 ns. Thus, the new source opens up a whole new measurement range, making the investigation of slowly diffusing adsorbates possible. This significant improvement has been demonstrated in first measurements studying the diffusion of benzene/Cu(100) [1].

Furthermore, an investigation of the effect of shape and size of the skimmer and its mount revealed two competing attenuation processes on either side of the skimmer. The new design, reducing the size of components in immediate vicinity of the skimmer, increased the intensity of the helium beam by approximately 20 %. Further improvements of the performance of the source are conceivable by replacing the current skimmer with one of a wider angle to study the attenuation within the skimmer itself.

Moving on to the experimental part of this thesis, Chaps.  5– 7 presented a study of the diffusive motion of three five-membered aromatic molecules, specifically cyclopentadienyl (Cp), pyrrole and thiophene on Cu(111). All three molecules were found to be highly mobile on the hexagonal surface and move in jump diffusion between adjacent adsorption sites.

The lineshapes in the HeSE data are of a complex nature, reflecting contributions from several different processes. In the case of Cp, vibrational motion of the copper substrate and the molecule itself could be identified, as well as a fast drop at small spin-echo times, corresponding to rapid diffusive motion within the adsorption well. The fast decay signature for intracell motion had been predicted using molecular dynamics simulations [2], yet little experimental evidence confirming the theoretical work was available previously. Similar fast decay signatures were also observed in the lineshapes of pyrrole and thiophene data, indicating that diffusive motion on short timescales is comparable for all three adsorbate species. In the case of thiophene, the fast decay signature proved difficult to analyse due to the presence of rotational motion, highlighting the value of a comparison with similar systems such as Cp/Cu(111), which enabled the identification of these features as intracell motion.

On longer spin-echo times the decays from jump diffusion dominate the measured data. Investigating the \(\alpha (\Delta {\varvec{K}})\) dependence and the lineshapes in the HeSE data showed that the three adsorbates each prefer different adsorption sites: Cp hops between fcc and hcp hollow sites, while pyrrole prefers bridge sites and thiophene adsorbs on top of the copper atoms. On an fcc(111) surface, top sites form a simple Bravais lattice, evident as a single decay in the intermediate scattering function (isf), whereas multiple sites in the unit cell result in a sum of two exponentials in the isf in the case of hollow or bridge sites. For Cp/Cu(111), the two decays for hopping between fcc and hcp sites could be distinguished clearly, providing a first experimental confirmation of the predicted multi-component lineshapes. In addition, the double decays are accessible to comprehensive Bayesian statistical analysis probing the probability space across the entire data set to determine the energy difference between the hollow sites: \(10.6 \,\pm \,1.7\) meV. In the case of pyrrole/Cu(111), however, strongly repulsive lateral interactions between the adsorbates alter the experimental lineshapes, changing their appearance to a single exponential. Molecular dynamics (MD) simulations comparing the behaviour of a single particle with that of multiple interacting adsorbates confirmed the effect of lateral interactions on the lineshapes, as predicted in previous work by Martínez-Casado et al. [3]. Finally, measurements of the motion of thiophene revealed complex lineshapes due to the presence of two competing processes, jump diffusion as well as rotational motion around a S–Cu anchor point.

The observation of a distinct preferred adsorption site for each system is in accordance with the different types of bonding to the substrate. dft calculations [4, 5, 6, 7] showed that Cp, which is not chemically stable in the gas phase, receives 1.1 electrons from the substrate upon adsorption, forming an ionic bond. Pyrrole, on the other hand, is a neutral molecule in the gas phase and forms a weak bond with the copper surface, predominantly through van der Waals interactions. Thiophene, finally, has a lone electron pair on the sulfur atom that is not delocalised in the aromatic ring and thus free to bond to the surface [8]. Therefore, thiophene adopts a tilted geometry with a covalent S–Cu bond and weak dispersion forces between the carbon atoms and the substrate.

Despite differences in the vertical bond strength, experiments revealed apparent activation energies for horizontal motion that are fairly similar for all three adsorbates: \(41\,\pm \,1\) meV for Cp, \(53\,\pm \,4\) meV for pyrrole and 59–62 meV for thiophene. dft calculations demonstrated that the apparent activation energy for pyrrole is largely due to a site dependence in the zero point energies (zpe) of the vibrational modes of the molecule. Interestingly, the largest contribution to the zpe difference is made by the C–H and N–H out-of-plane bending and ring torsion modes that are not directly involved in the diffusion. Further HeSE measurements of deuterated pyrrole/Cu(111) could be performed in order to study the effect of quantum modes experimentally, expected to result in an altered activation barrier for diffusion.

The centre-of-mass motion of the five-membered molecules on Cu(111) was modelled using classical Langevin MD simulations describing the adsorbates as point particles moving across a potential energy landscape. By optimising friction, activation barrier and the shape of the adsorption well, the experimental results were reproduced very well. The simulations have yielded further information on microscopic aspects of the diffusive motion, showing a large friction coefficient for each of the three systems: \(2.5 \,\pm \, 0.5\) ps\(^{-1}\) for Cp, \(2.0\, \pm \,0.4\) ps\(^{-1}\) for pyrrole and \(5\,\pm \, 2\) ps\(^{-1}\) for thiophene on Cu(111). Such exceptionally high friction for thiophene, which adsorbs tilted at an angle to the substrate, indicates that the increase in friction commonly observed for molecular adsorbates cannot be explained simply by an increase of the adsorbate–substrate contact area. A joint investigation with de Wijn provides an alternative explanation [9]. A comparison of the present experimental results with molecular dynamics simulations, including the external as well as internal degrees of freedom of the molecules, demonstrated that the increase in friction observed in extended molecular systems can be attributed to frustrated rotation around axes parallel to the surface plane and activated rotation around the z-axis.

Lastly, MD simulations have demonstrated that a simple 1/\(r^3\) dipole–dipole potential cannot adequately describe the lateral interactions between strongly interacting pyrrole adsorbates, as apparent in the deviation of the simulated de Gennes features from experimental results. Simulations testing a new interaction potential that accounts for the extended nature of the molecule have demonstrated the need for further theoretical work looking into the precise functional form of the interaction potential.

Overall, the present work has laid a foundation for the study of complex surface dynamical systems, providing measurements of the motion of three prototypical adsorbates as well as improved experimental equipment, which will hopefully be useful for future work in this field.