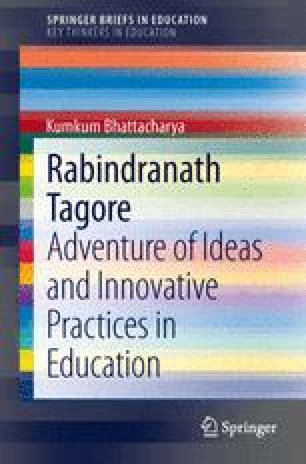 Extension of the Self and Rural Reconstruction

Tagore gained his first insight into the condition of the Indian peasant during the decade (1890–1900) he looked after the family estates where he made two important discoveries: first, the villagers seemed to have lost all ability to help themselves and secondly, both research and technical assistance would be needed if they were to learn how to rescue themselves from their creeping decay. This idea was indeed way ahead of his times—that education and knowledge could be pressed into professional service of the needy and the excluded that he demonstrated in his institution in Sriniketan (the twin campus to Santiniketan). This chapter not only traces the historical development of Tagore’s ideas of rural reconstruction or the Sriniketan Experiment but also raises some important questions that are relevant in the functioning of the university even today. Rabindranath believed that there were many syncretic strands and patterns that made a composite culture and there was the danger of the strands and streams drying up because of the urban-driven nature of development. L. K. Elmhirst, British agricultural scientist, was one of the chief architects of the Sriniketan experiment that started functioning in 1922 with the objective, ‘To bring back life in its completeness into the villages making them self-reliant and self-respectful, acquainted with the cultural traditions of their own country and competent to make an efficient use of the modern resources for the improvement of their physical, intellectual and economic condition’. Varied and multi-faceted programmes including mass and continuous education were undertaken in Sriniketan for the fulfilment of the above objective.