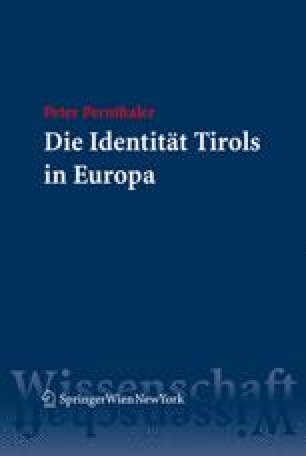 In this study, the term “identity” shall express the complex basis of regional autonomy and politico-geographical unity of the Land Tyrol. The historic roots of the Land’s identity are certainly important. Today, however, identity of the Land means a dynamic process of development and change. The most relevant reason for this dynamism is the division of the region into different parts (Land Tyrol and Autonomous Province of Bozen-South Tyrol) that belong to heterogeneous national systems with their own social, political and constitutional fundament. The identity of the “Land as a whole” (Constitution of the Land Tyrol) must thus be described as a complex of different national autonomies that are linked legally and politically (Treaty of Paris, 1946; “package solution” and settlement of disputes, 1969/1992; protecting power of Austria) which is based on the common culture and ethnicity of the regional populations. These integrating elements, however, play an increasingly minor role, being confronted by the dynamics of the respective part’s “own” regional identity. Even the project of a legal institutionalisation of regional transborder co-operation within a “European Region of Tyrol-South Tyrol-Trentino” has so far hardly contributed to their integration.