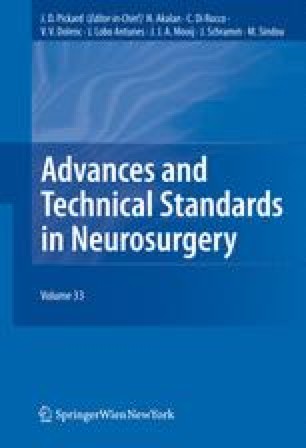 Advances and Technical Standards in Neurosurgery pp 151-199 | Cite as

Extended endoscopic endonasal approach to the midline skull base: the evolving role of transsphenoidal surgery

The evolution of the endoscopic endonasal transsphenoidal technique, which was initially reserved only for sellar lesions through the sphenoid sinus cavity, has lead in the last decades to a progressive possibility to access the skull base from the nose. This route allows midline access and visibility to the suprasellar, retrosellar and parasellar space while obviating brain retraction, and makes possible to treat transsphenoidally a variety of relatively small midline skull base and parasellar lesions traditionally approached transcranially.

We report our current knowledge of the endoscopic anatomy of the midline skull base as seen from the endonasal perspective, in order to describe the surgical path and structures whose knowledge is useful during the operation. Besides, we describe the step-by-step surgical technique to access the different compartments, the “dangerous landmarks” to avoid in order to minimize the risks of complications and how to manage them, and our paradigm and techniques for dural and bony reconstruction. Furthermore, we report a brief description of the useful instruments and tools for the extended endoscopic approaches.

Between January 2004 and April 2006 we performed 33 extended endonasal approaches for lesions arising from or involving the sellar region and the surrounding areas. The most representative pathologies of this series were the ten cranioparyngiomas, the six giant adenomas and the five meningiomas; we also used this procedure in three cases of chordomas, three of Rathke’s cleft cysts and three of meningo-encephaloceles, one case of optic nerve glioma, one olfactory groove neuroendocrine tumor and one case of fibro-osseous dysplasia.

Surgical complications have been observed in 3 patients, two with a craniopharyngioma, one with a clival meningioma and one with a recurrent giant pituitary macroadenoma involving the entire left cavernous sinus, who developed a CSF leak and a second operation was necessary in order to review the cranial base reconstruction and seal the leak. One of them developed a bacterial meningitis, which resolved after a cycle of intravenous antibiotic therapy with no permanent neurological deficits. One patient with an intra-suprasellar non-functioning adenoma presented with a generalized epileptic seizure a few hours after the surgical procedure, due to the intraoperative massive CSF loss and consequent presence of intracranial air. We registered one surgical mortality.

In three cases of craniopharyngioma and in one case of meningioma a new permanent diabetes insipidus was observed. One patient developed a sphenoid sinus mycosis, cured with antimycotic therapy. Epistaxis and airway difficulties were never observed.

It is difficult today to define the boundaries and the future limits of the extended approaches because the work is still in progress. Such extended endoscopic approaches, although at a first glance might be considered something that everyone can do, require an advanced and specialized training.